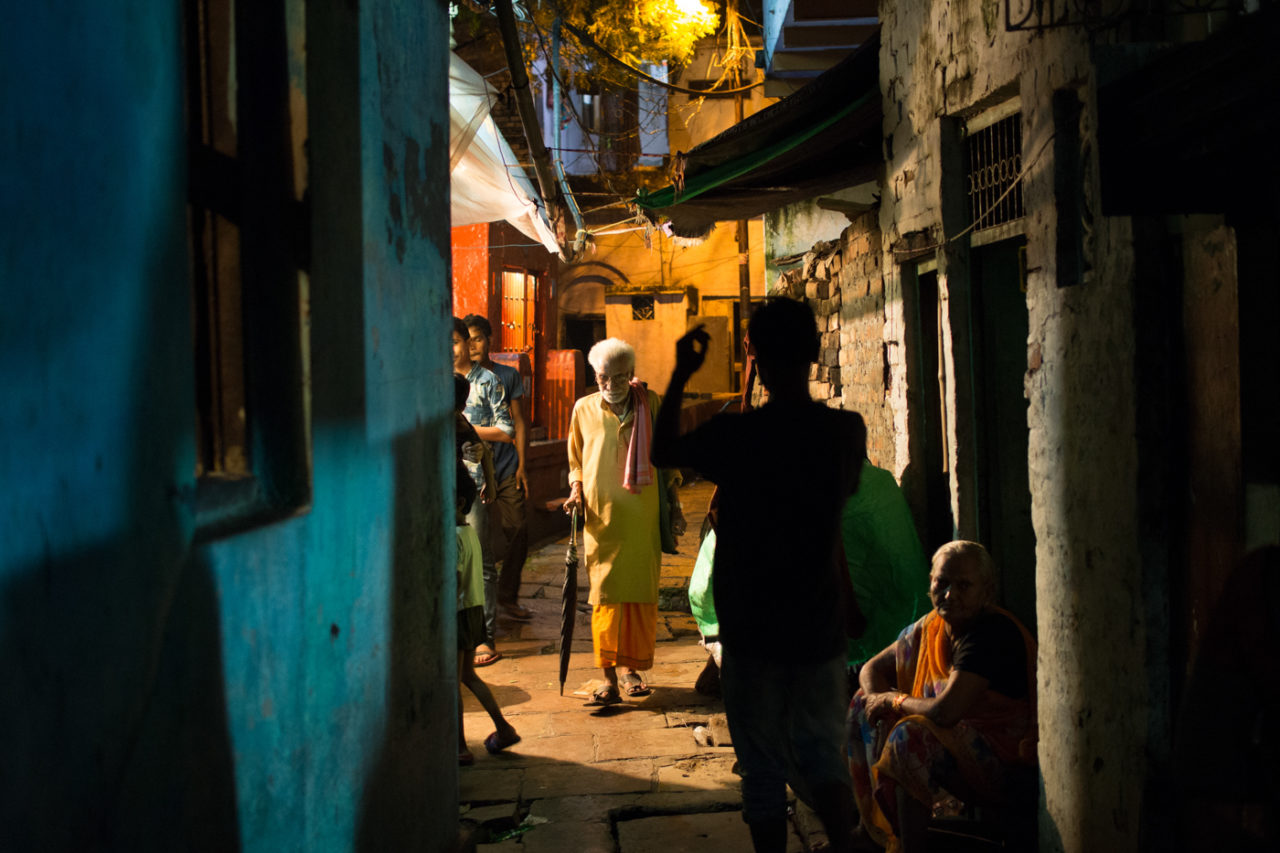 As an anthropologist, I have always been fascinated by the diversity appearing in a certain unity within this world. As an artist, I constantly question the act of perception occurring through the body, shaped by my culture and personal life experiences.

This is my first exhibition, my first time putting together my anthropological work and artistic perspective. I have brought together artists with whom we share the same vision : a concern for human beings, culture, differences and unity within this world. It is a common dialogue, using various formats from artistic and street photography, documentary or fiction, to performance.

Why did I choose South Asia? In exploring that which appears different from us, we discover ourselves. If my studies took me to this part of the world, learning about the ancient scriptures and antique temples and devotional objects, it is also a meeting with the echo of what is essential and tremendously true in every human being.

Traces weave the world, our culture, the memory that inhabit us. Anonymous or known, everyone participates in these traces; this infinite colour that braids the world in which we live. Traces that guide me on a path that comes back to its point of origin. 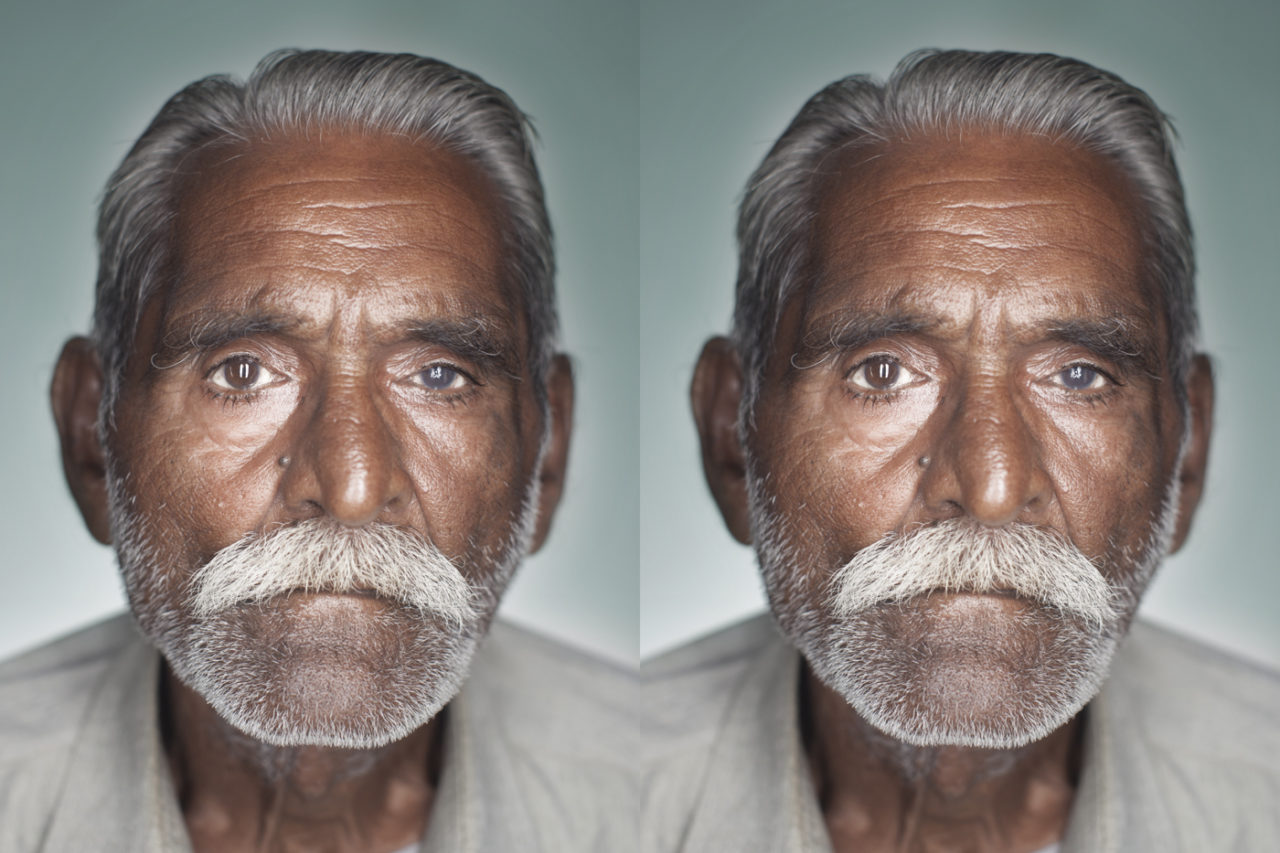 SHOVAN GANDHI
BEFORE AND AFTER [photography – India]

The human body carries meaning on its surface, but meaning is negotiated in relation to and in comparison with other bodies. It is through this comparison that the idea of beauty is made apparent: not as something possessed in itself, but as a characteristic that is socially bestowed, and that the possessor has the power to negotiate, to change, and to enhance.

It is the surface of the human body (i.e. the skin) that is valued visually, and superficially. By offering the tools to change or “fix” one’s personal appearance in order to adhere to mythic ideals of beauty, marketers, manufacturers and the media create a ceaseless need to buy in order to beautify.

My attempt was to excavate the tricking of consumers into buying something, by unearthing half stories and half-truths. Beauty is such a highly subjective, constantly evolving idea. Yet, it is also increasingly standardized. A globalized consumerism has led to an incessant need for buying to beautify and instant gratification.

Traditional ‘before and after’ diptychs tell an obvious story. I’ve tried to challenge the perceptions of the viewer, and crush the notion of a “Before” and “After,” by using the formula of repetition to evoke multiple ways of “seeing” an image or “seeing” beauty itself.

As habit the viewer, looking back and forth, looks for a change or remedy in the ‘After’ image, but instead is forced to question the need for a beauty ideal, and in turn, of the products that enable that template of beauty.

This time the aim is to question instead of to compare.

Shovan Gandhi is a visual artist and photographer based in New Delhi, India. His practice is drawn from his interest in architecture, design and cinema. His works in fashion and advertising are largely conceptual and experimental. Shovan has contributed to various magazines and publications nationally as well as internationally.
In personal projects, he focuses on photographing and archiving spaces of conflict with socio-cultural and political backgrounds. Through editing he explores the narrative possibilities of sequencing and story-telling, creating fictional or sometimes hyper-realities from the documentary. Currently, Shovan is working on a set of photo books based on his ongoing series of works. 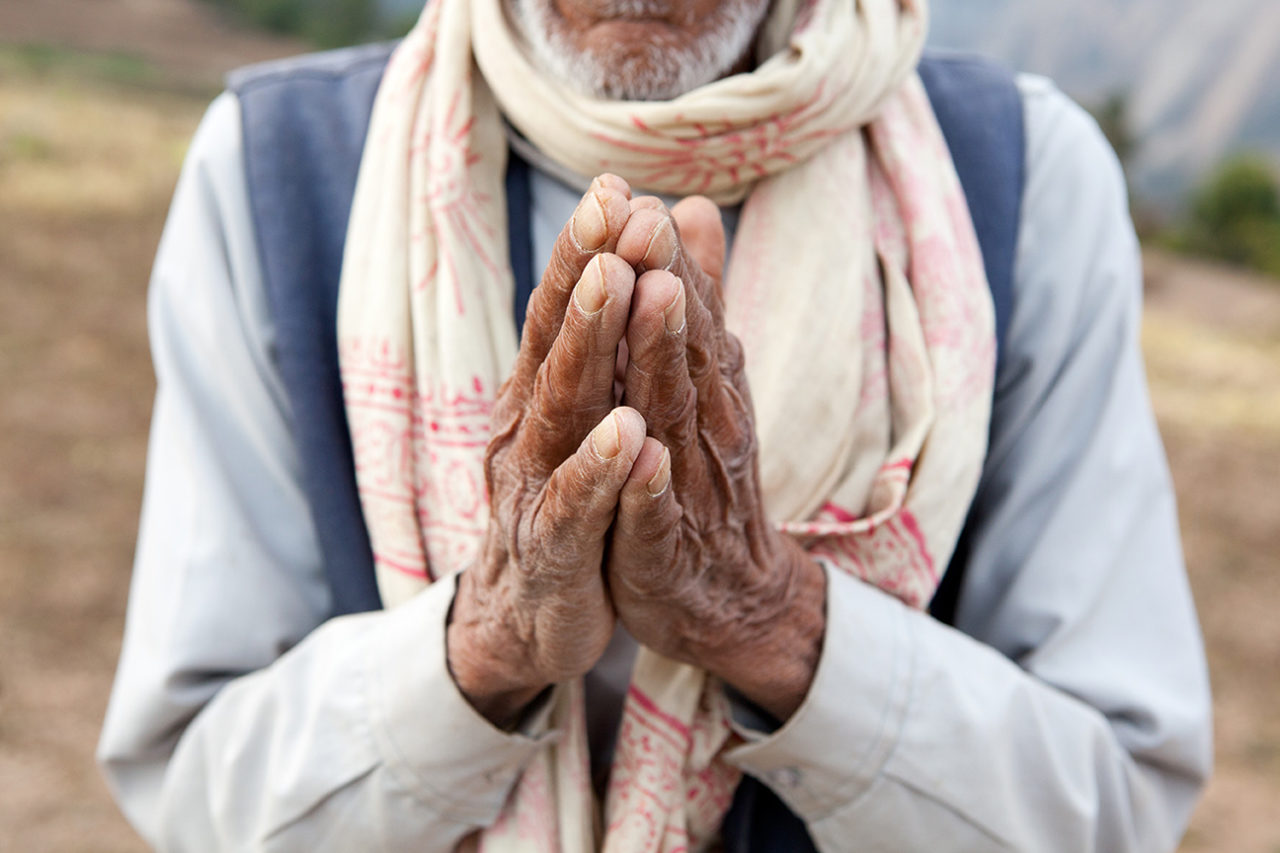 There are movements and offerings that one makes to connect with the invisible world. The invisible is an extension of the concrete material world. Between here and there, lie the traces which act as bridges linking these worlds. Traces are also remnants of time, where the past is negotiated constantly updated in the present of the one who observes them.

Passionate about people, the spaces they create and inhabit, their way of life and the arts, Kiran Ambwani is an Indian photographer based in Montreal.

Kiran’s images reflect a sensitivity shaped by her background in anthropology and environmental studies, and her numerous travels. Driven by a curiosity for the problematic encountered by marginalized populations, Kiran has explored, among others, the lives of Tibetan monks in exile in south India, the survivors of child trafficking in Mumbai & Kathmandu, the inhabitants of the largest Asian slum (Dharavi), and post-disaster relief efforts in Nepal, Ecuador and Haiti. In order to share her environmental and social concerns with the public, Kiran’s work documenting the human condition, human rights issues and foreign aid has been diffused by various publications worldwide, notably CBC Radio Canada, Chatelaine, Le Devoir, Vogue, MindFood, Travesias, Geo Plein Air and Indian Express.

Kiran has facilitated several photography workshops in Canada and abroad, for the general public, for patients living with cancer, for girls rescued from brothels in Nepal, for prostitutes and their children in India, and for victims of the earthquake in Ecuador. The resulting images have been shared with a wider audience through exhibitions and publications.

Kiran is a graduate of McGill University and the Dawson Institute of Photography in Montreal. She has participated in several groups and solo exhibitions of her personal work in Canada, Japan, India and Nepal. 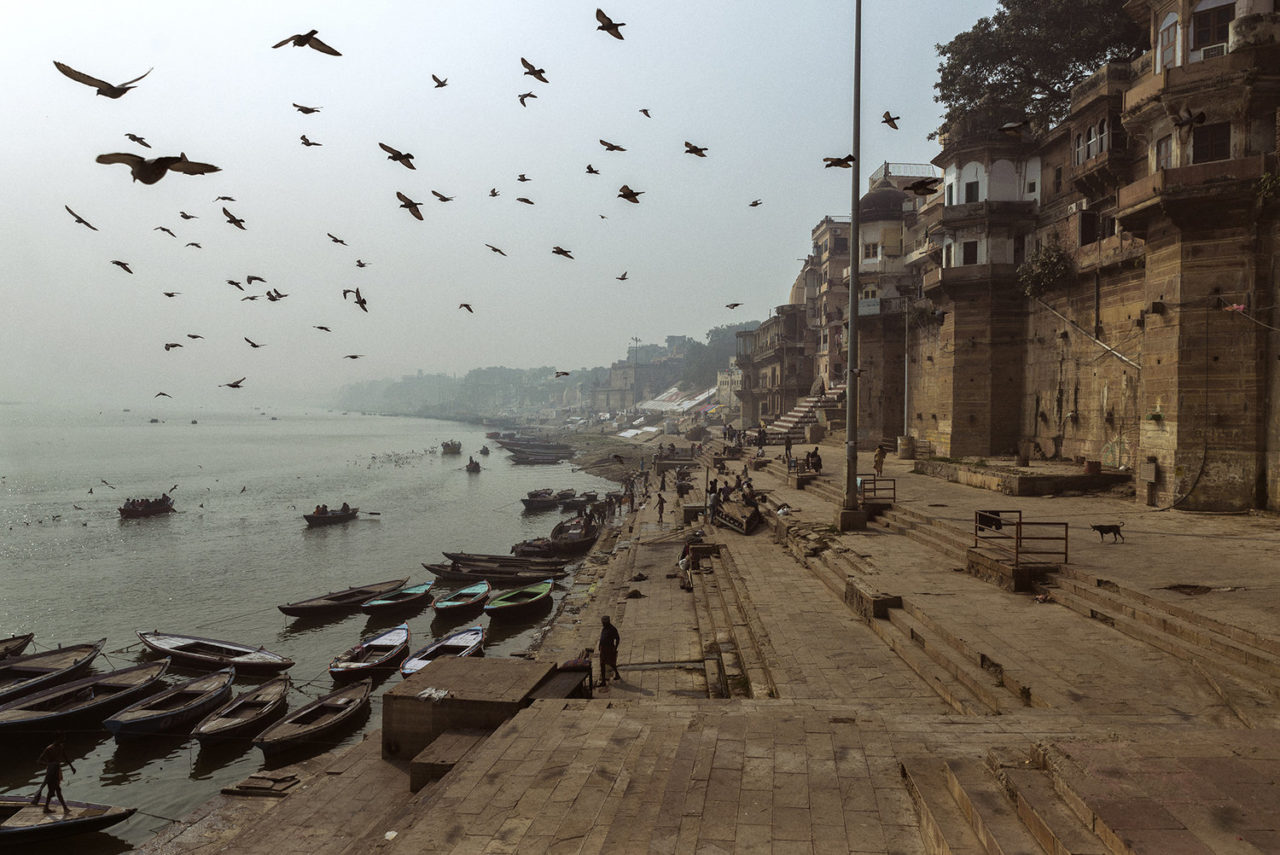 From the infinitely large to the imperceptible tiny exists those visual ingredients that come back: the colour, the shape or the line. They become like words for the eyes. Harmony and beauty — I found them like a souvenir, an intuition. From the details of an object to a landscape that spreads before the eyes, it is the same echo. It makes us remember something, tell stories to oneself.

After studying arts and 3D animation, Stéphane Desmeules began his career in video games at Ubisoft in 1997 where he advanced from modeller, to team leader, and finally to manager of the graphic studio. In 2001, he began teaching 3D-Design until 2015. He then had the opportunity to share his knowledge in character and environment modelling, animation and texturing in schools for artists. In parallel with his professional activities, Stéphane has illustrated three comics published by “Les edition Albin Michel” and “Édition Les 400 Coups” between 2001 and 2006. For the last 2 years, he has been working as a working community developer at Ubisoft where he organizes sharing events for artists and animator in addition to continuing to offer training on “Zbrush” and “Autodesk 3ds Max”. Since the end of 2014 he is particularly interested in artistic photography in collaboration with dancers, performers and yogis. 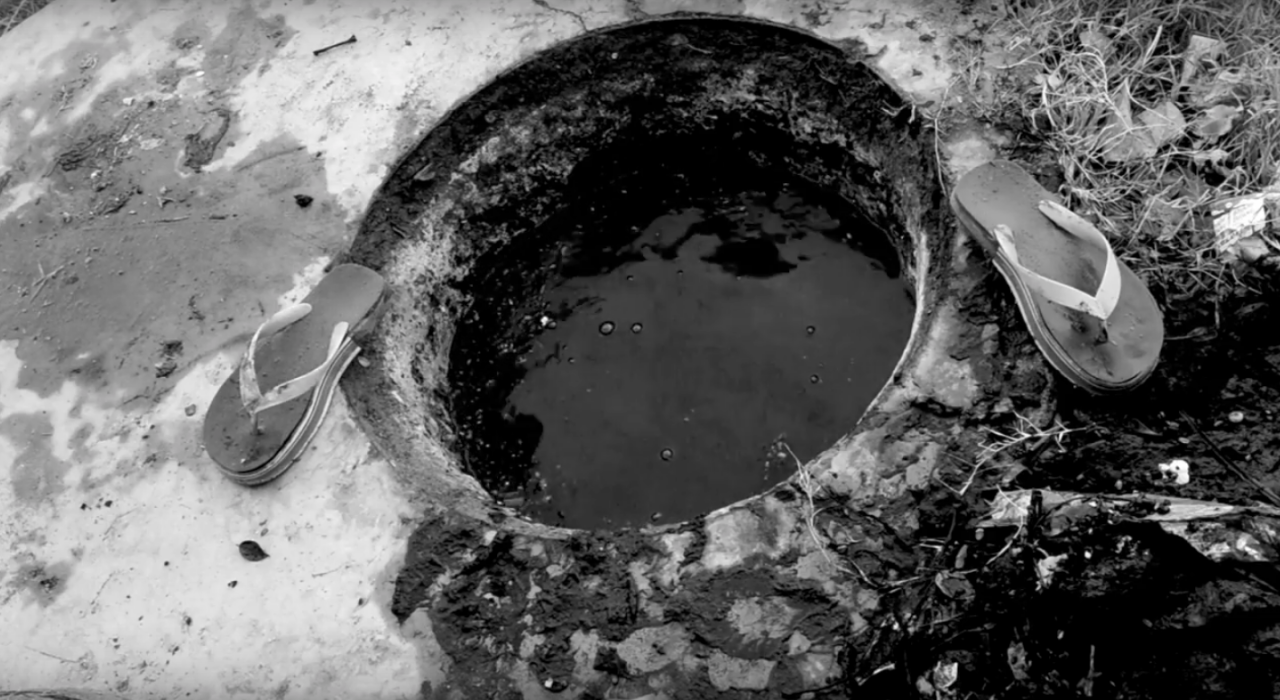 Hellhole is a short silent film based on the life of conservancy workers, better known as gutter cleaners as seen through the life and oft forgotten humanity of one such worker.

Mobeen is a photojournalist, painter and sculptor based in Islamabad, Pakistan. A graduate of National College of Arts in Rawalpindi, Pakistan, his mission is to promote a positive and often unseen side of his country through his photographs. Challenged with loss of hearing at a very early age, Mobeen has always been observant of his surroundings and translates those visually through different mediums.

He has travelled across Pakistan and focuses on places off the beaten path – especially South Punjab and Wakhan Corridor up far North. In 2014 he published a photography book called Dharkan: the Heartbeat of a Nation which features portraits and stories of iconic people and unsung heroes of Pakistan. His next book is on religious minorities of Pakistan, which is titled White in the Flag. He has given two TED talks and has exhibited his works in USA, Italy, Qatar, China, Pakistan and Iraq.

Mobeen’s short film Hellhole has won the Best Short Film (non fictional) Award at “Pakistan Calling Film Festival” and has screened at film festivals all over the world. 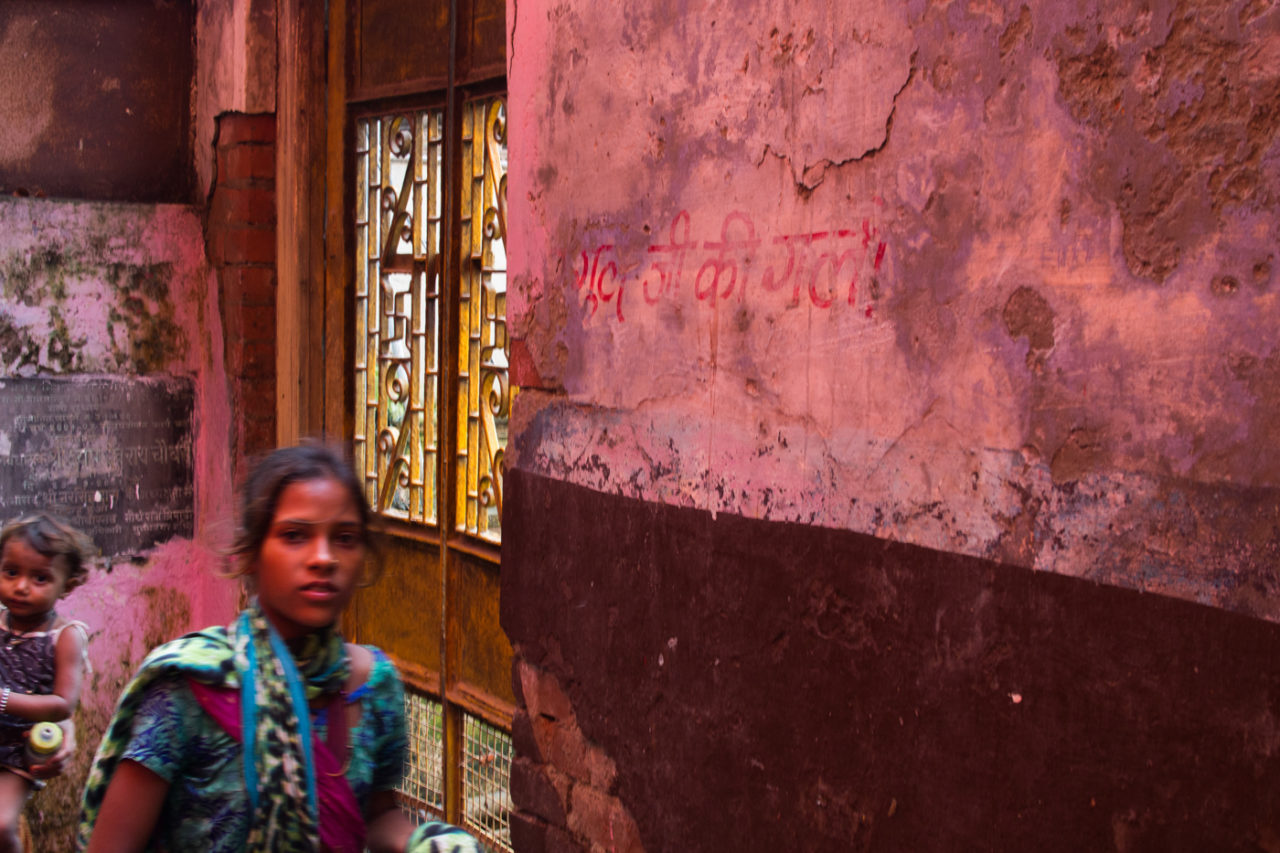 MARIETTE RAINA
IN BETWEEN [photography – India]

I have always been fascinated by the “in between.” This space where a movement or a thought has started but has not ended yet. It lies before the conclusion, between the inhale and the exhale, between one sentence and the other, between one action leading to the next. Human beings tend to conclude right away or jump into another action, out of fear and need to feel that they are in control.

This is the moment when you have no plans, when you do not know anymore, when there is a silence during a conversation. The sacred space is hidden in time, in those “in between” sections. Those moments are magical, they are suspended beyond standard time and space. It is the moment when the human being is not contextualized anymore but brought to his archetypal form. In one moment, all the archetypes exist, as if in this one action the mystery of creation is actualized again.

Mariette Raina emigrated from France when she was 20 years old and settled in Montreal where she has resided since. Her various activities are simultaneously related by the same exploration : understanding human beings and the world.

Her research skills are based on her anthropological formation. In parallel to her studies, Mariette explores art through photography and performance, questioning the act of perception, the relationship toward one’s image, as well as the body as a vehicle of expression. She started teaching photography at UdM in 2015 among the “Cultural Activities Panel,” where she instructs the process of creation through photography.

Mariette graduated from University of Montreal (UdM) in Anthropology in 2014, where her main focus was ethnography. In 2016, she was hired by Never Apart as a monthly columnist for their online magazine, where she publishes articles along with her photographs. 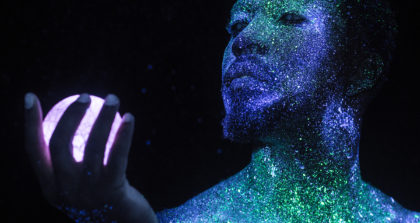 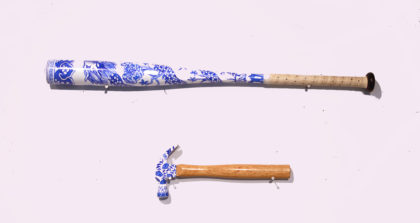 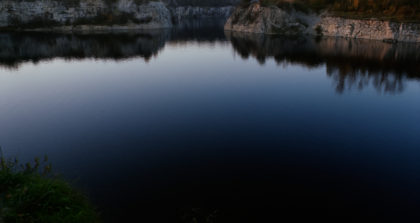 When put into a specific category, the subject might (will) lose its colours and specificity.