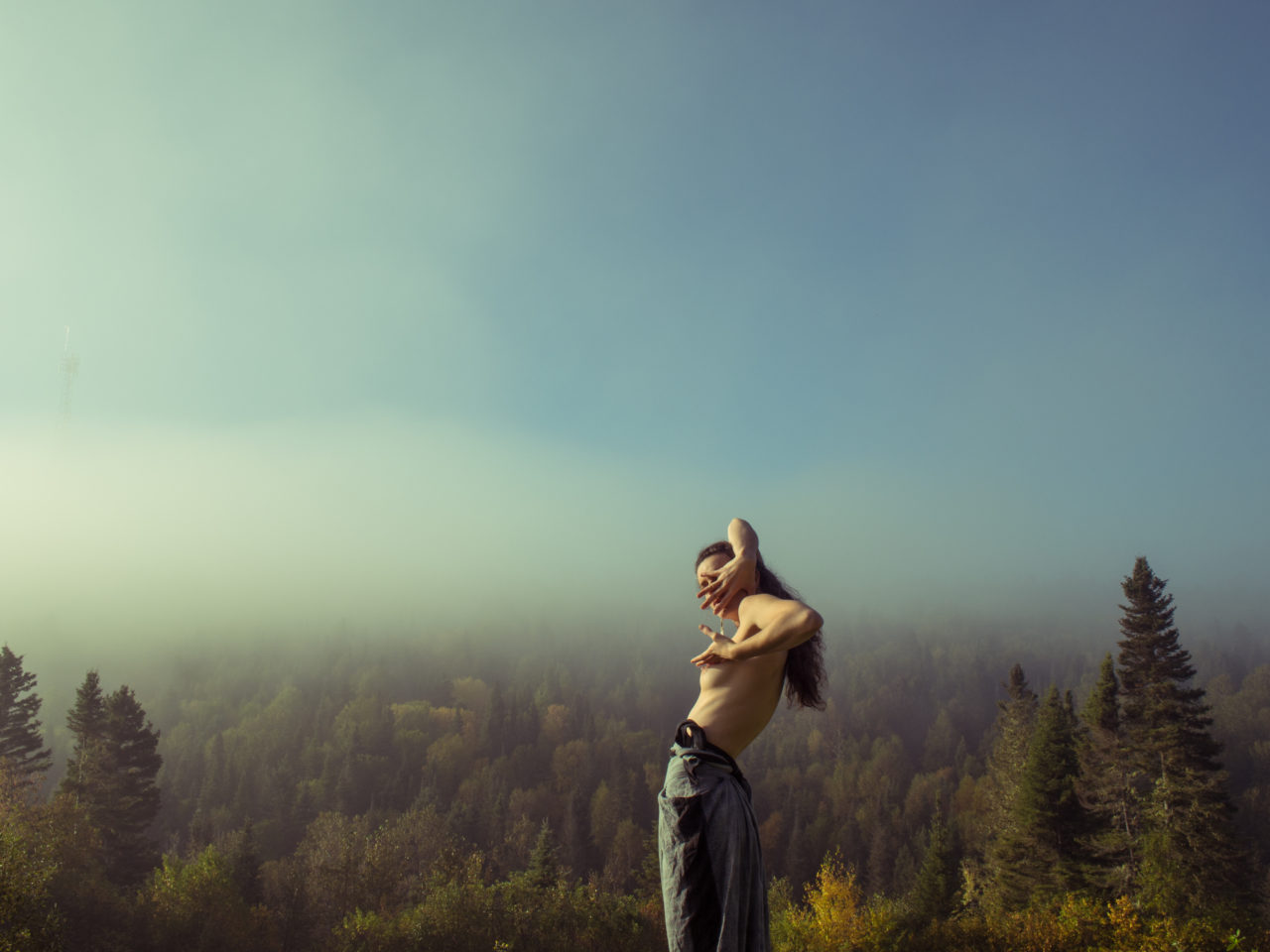 November is normally the month when I teach my semester course at the University of Montreal’s cultural activities. But this fall, 80% of classes were cancelled because of the Covid measures. For lack of teaching the course, I thought I would put some ideas that are normally shared with students, here in an article. A course on what? Photography, entitled “nude and living drawing”: its history, its practice, its art.

I have been working as a model since I was 19, and since I was 26, I have been taking photography seriously. Thanks to my anthropology studies, which I did in parallel with my artistic activities, I approached this world as a field study, applying my anthropological observation tools.

There are two types of body perception: the one perceived by everyone and the one as seen through the artist (or art lovers) eyes. The body, as an average person generally perceives it, is very limited. There is a mass of flesh that I use to move around. The nude occurs in the privacy of the home, in the evening when I undress to take a shower and go to bed, or in the context of a sexualized intimate relationship, inseparable and limited to these two experiential moments. For example, for the dancer who will work on touch or contact with his partners, the body is a space of feeling, of creation. Contact does not necessarily imply a physical attraction to the other. It is experienced for what it is: an encounter. 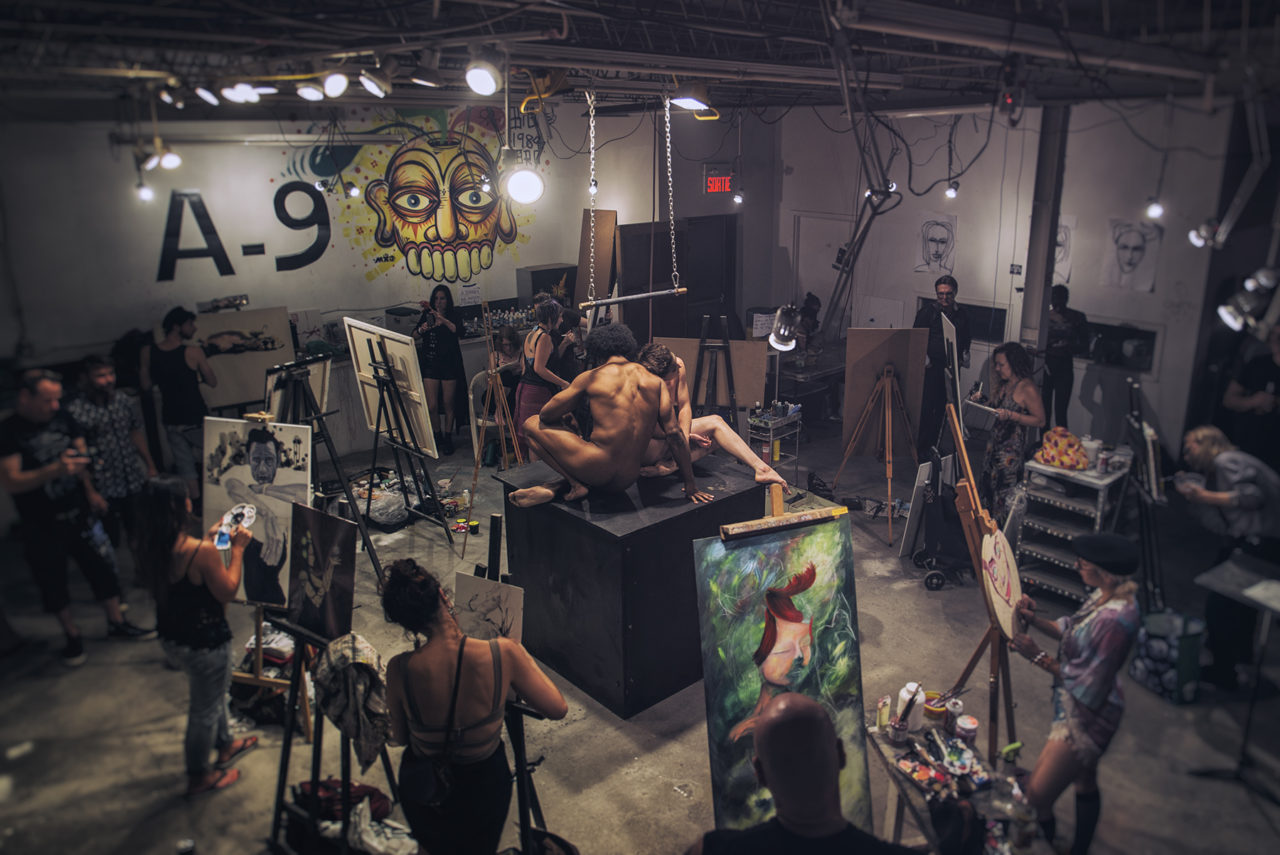 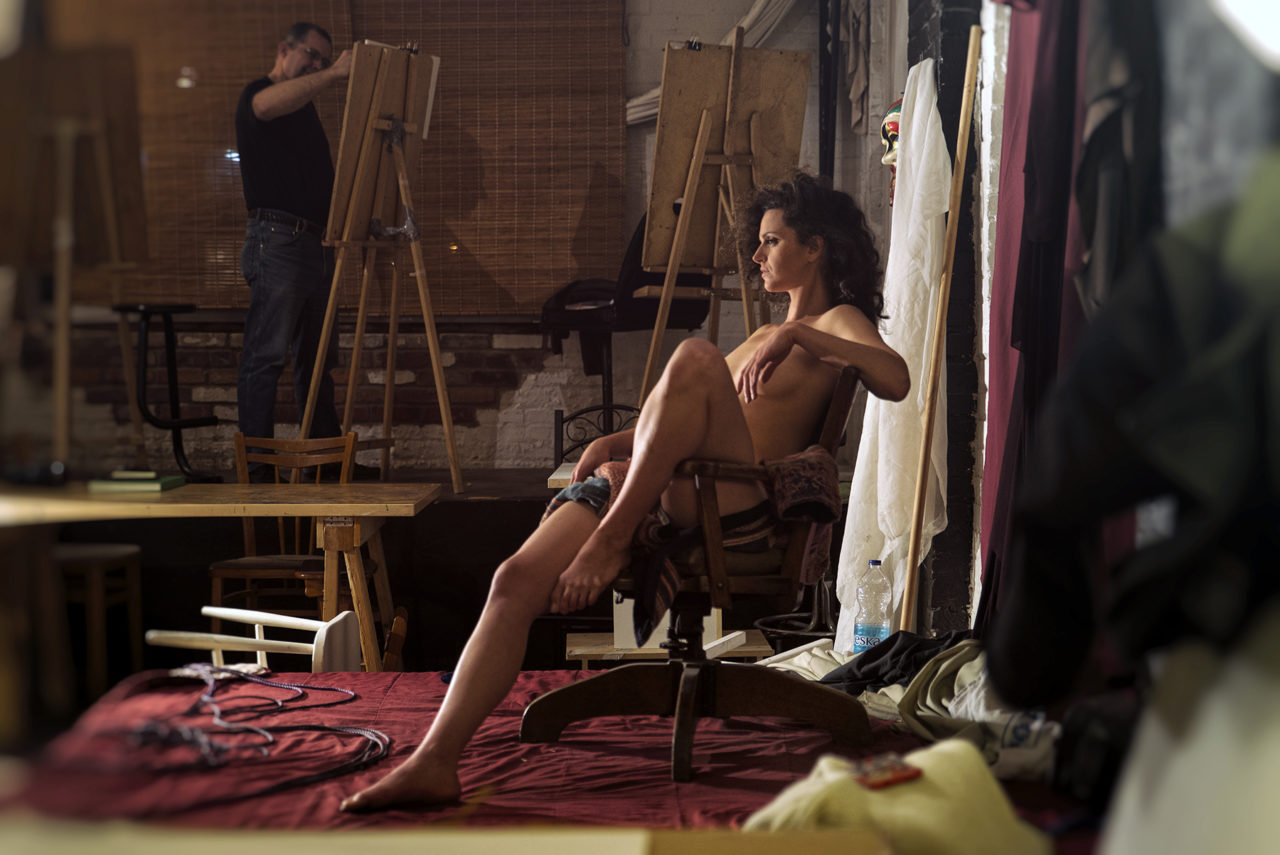 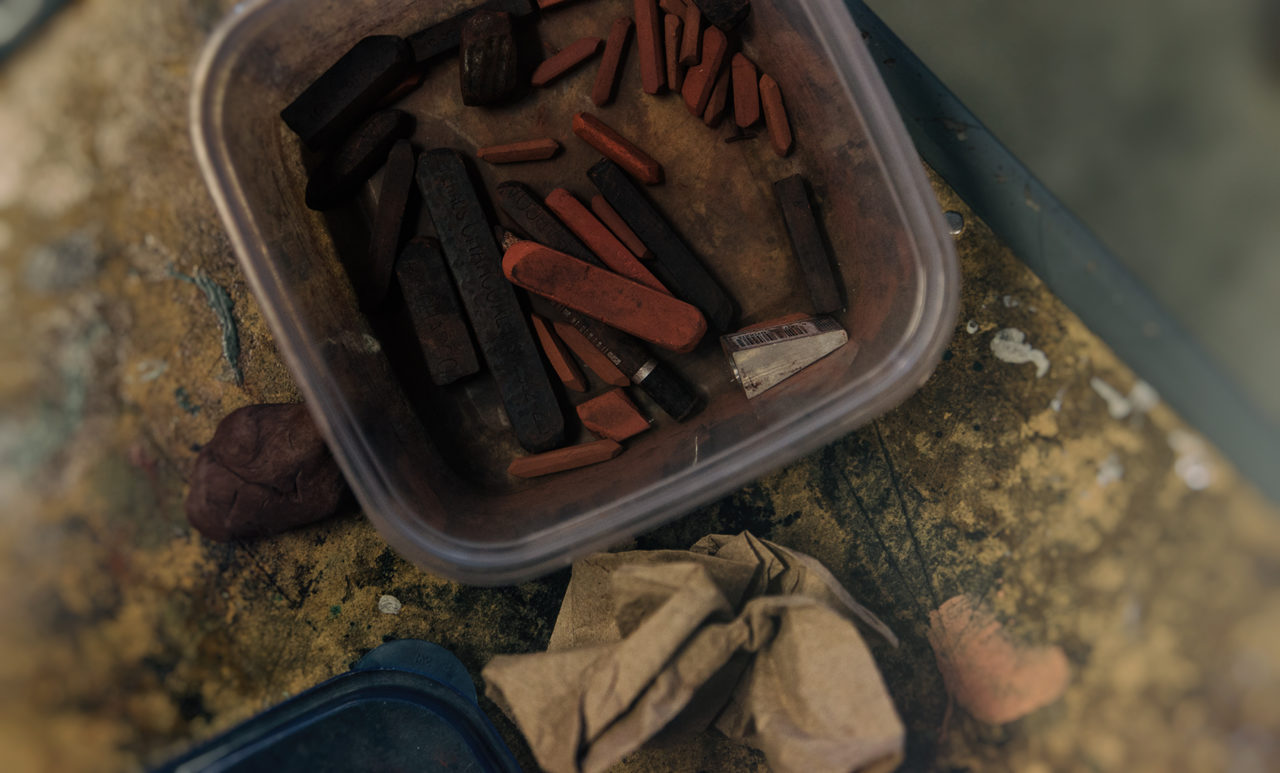 In the studio of the artist who studies the nude, the body becomes a series of spheres on which a play of light and shadow appears. It is a volume, a subject for observation. The study of the nude is the basis of all great artists. It has been around for as long as the body is represented, since the artist, in order to portray it, had to understand bone and muscle structure, joints and movement. As a model, having an artist studying our naked body with this gaze is an experience that hardly exists anywhere else in our life. Some speak of a therapeutic gaze that reconciles with a negative self-image.

A doctor can look at the naked body in this way, with this form of neutrality. In fact, doctors and artists historically worked together, illegally digging up corps to study their anatomy. But often, medicine associates disease with the body, while the artist associates the body with emotion and beauty. 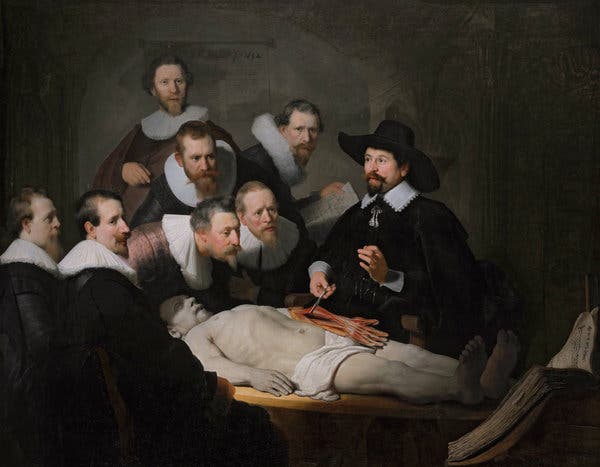 The concept of beauty is key in the artistic body. All bodies are beautiful because all bodies are endowed with movement, volume and history. What matters most is the soul, the character of the person who breathes and radiates behind that body. This is why artists have often confided to me that the bodies of fashion models, “perfect” from a commercial point of view, are not as interesting for an artist because they are too “empty. “.

The nude is a link with the history of art. Each live model session reactivates a collective memory to which the great masters belong and whose presence is still alive. In a live-model session, there is this silence, this presence in which artists and models have a heightened concentration. Everyone forgets themselves as a person and as an individual and puts themselves at the service of something greater to become a channel of creation. And there, magical moments happen. In this silence, these threads woven in space begin to vibrate, where only the sound of charcoal on paper is heard. The invisible space between the artists and the model comes alive. Inspiration visits everyone. Stories are told in this palpable space of substance. When the session ends, the body can feel stiff and tired but emotionally energized because, during that moment of creativity, a real moment of sharing happened on another level. Everyone is seen and watched for what they are, without projection, without expectations, just listening and observing, the left brain activating.

Photography is another story. Continuity of the art of life-modeling in the fine-artist studio, it can nevertheless be too easily diverted. Where the designer, the painter, the sculptor must work and get involved without being able to cheat to become masters of their art, photography is accessible to everyone nowadays and software that automatically “retouches” photos are common tools. However, painting, drawing, sculpture and photography respond to the same artistic laws. I always say to my photography students: do you want to learn photography? Went to classical art museums. Look at the Flemish painting, that of the Renaissance: all the photography laws are hidden there. Whether for light management, the model’s expression, the framing, the story that we must build in our photo. Photography is an art, but it requires – just like other artistic disciplines – to be highly thought out and worked.

In my workshops, I make my students work in natural light, sometimes when daylight is hardly visible. They are often caught off guard, “but it’s too dark! But my photo will be too grainy! And so… look better, something is going on here”. Far from photography with a commercial aesthetic, I prefer the one with shadows or that of strong contrasts where the body is revealed. It appeals to intimacy, to the emotions that are hidden in everyone. It takes a lot of observing and listening to your surroundings. Knowing how to listen to the light is an art and requires a form of humility. 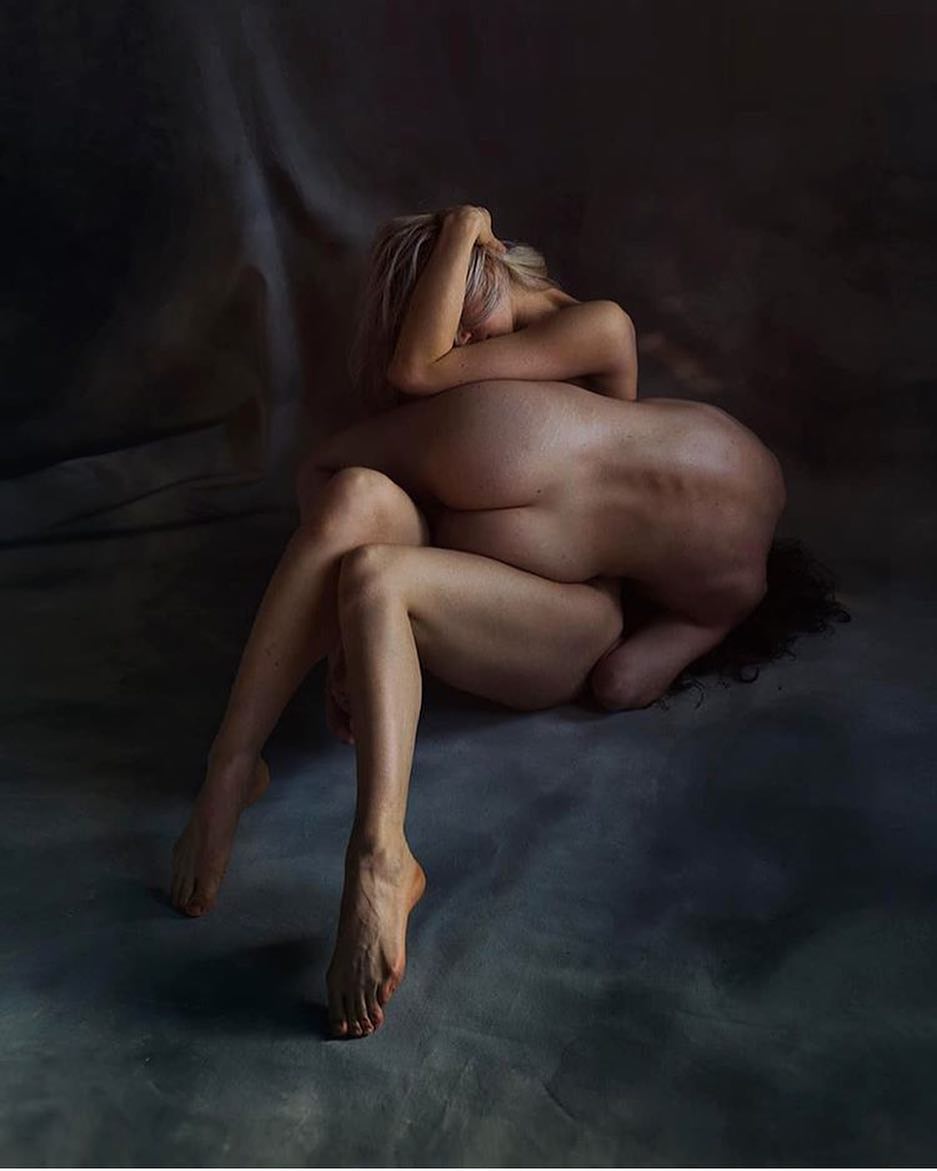 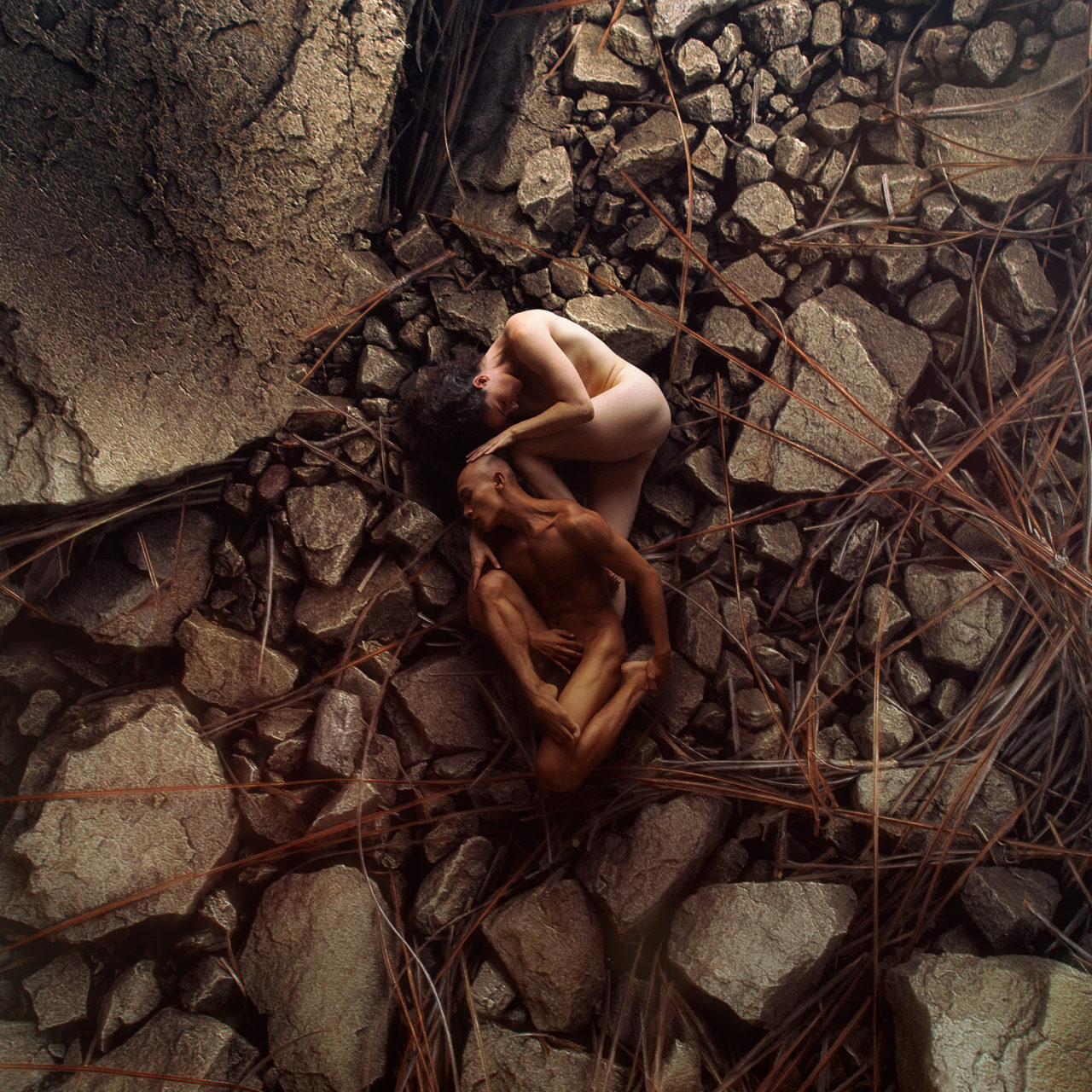 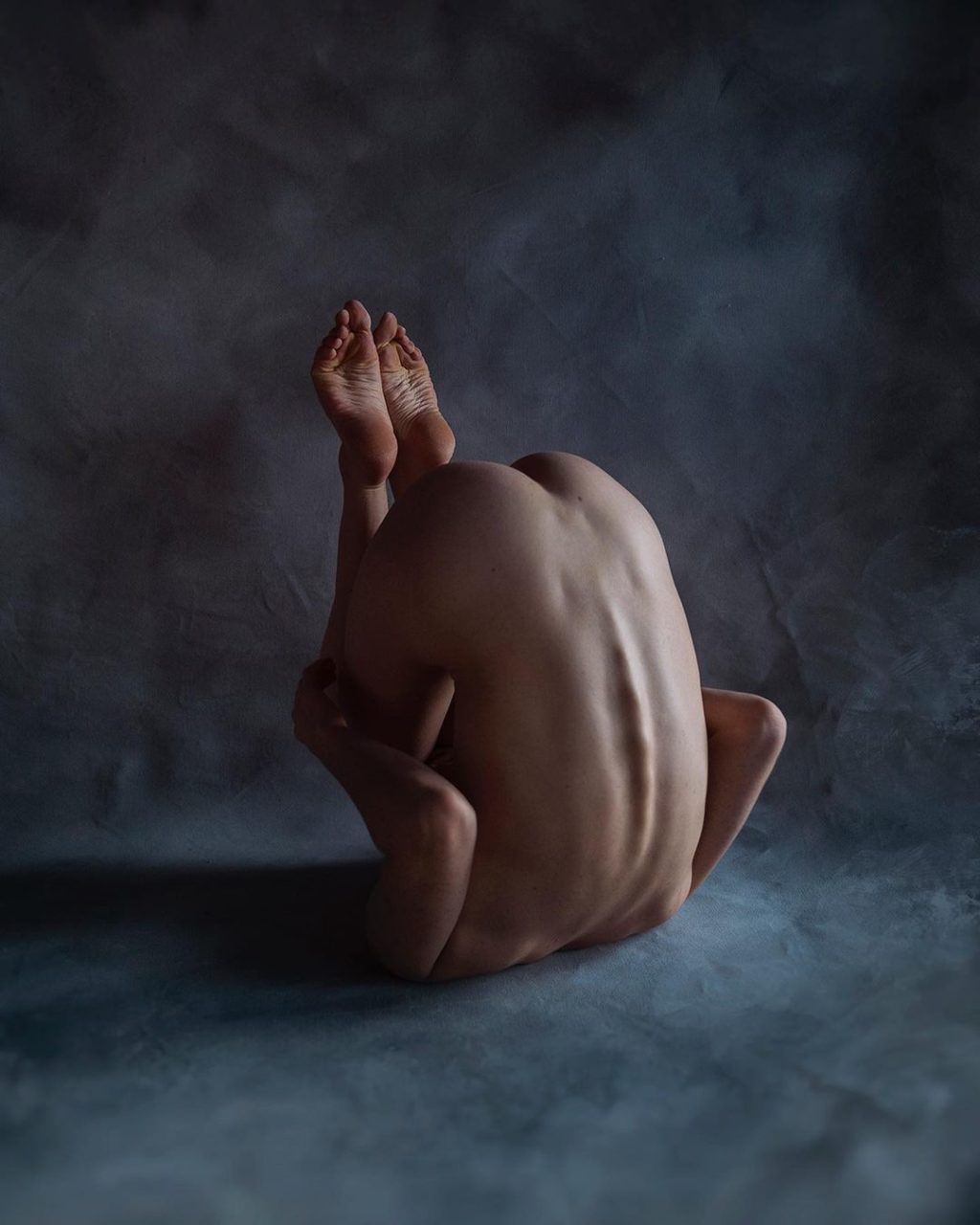 The connection to the model is an important element. The model is not an apple. All too often, photographers cannot communicate. I correct: most human beings do not know how to communicate with each other. I see them hidden behind their camera like a shield as if the repeated “clicks” camouflage their shyness. It’s amazing to work with another human being, to really be facing another person. For the model, as much as for the photographer. So I invite the photographers to stop: “look, listen to your model. Observe how they move. Each movement is a proposition. It’s like a ping-pong game where they throw a ball at you. If you don’t say anything, you let the ball fall into the void. It’s tiring for the model. Answer them. You have to feed each other .” It is about finding the perfect balance between saying enough but not too much. In fact, it is an active passivity. You have to let go of the control and security while being totally active in the presence of realms to seize the moment when it appears. This is an art. And it’s a beautiful art because you can never master it. It is constantly reinventing itself from moment to moment.

Artistic photography becomes a mise en abyme of the self who is being discovered. The photographer who photographs the nude must question themselves — out of honesty for their model and their artistic approach — on their own relationship to the body and the nude. It takes introspection and a lot of vulnerability. The photographer who remains into an egotistical power game will never connect with this state of grace that we can touch during creation, at this moment when the ego vanishes. For the model, it’s the same, as confronting oneself with one’s image also means distancing oneself from it, and no slowly by slowly, not being afraid anymore, and letting go. I always say that a good model isn’t one who does the prettiest poses, but one who isn’t afraid to put their image in danger—the one who is not afraid to show their worse profile. To be beautiful, you shouldn’t be afraid of being ugly. Otherwise, one remains stuck in plastic and superficial beauty.

Of course, all these elements can be extended to everyday life. Photography is the reflection of the art of being. Artistic photography, which considers the human being in its grandeur, the body in all its nobility, is a photograph that participates in the weaving of the world. It weaves the richness of a culture and updates and rewrites all the spiritual archetypes on which our world is based. This is why we must learn to see further: it is not just a simple body standing in front of you. It is the world in its most secret, most profound, most magical side —archetypal beauty. 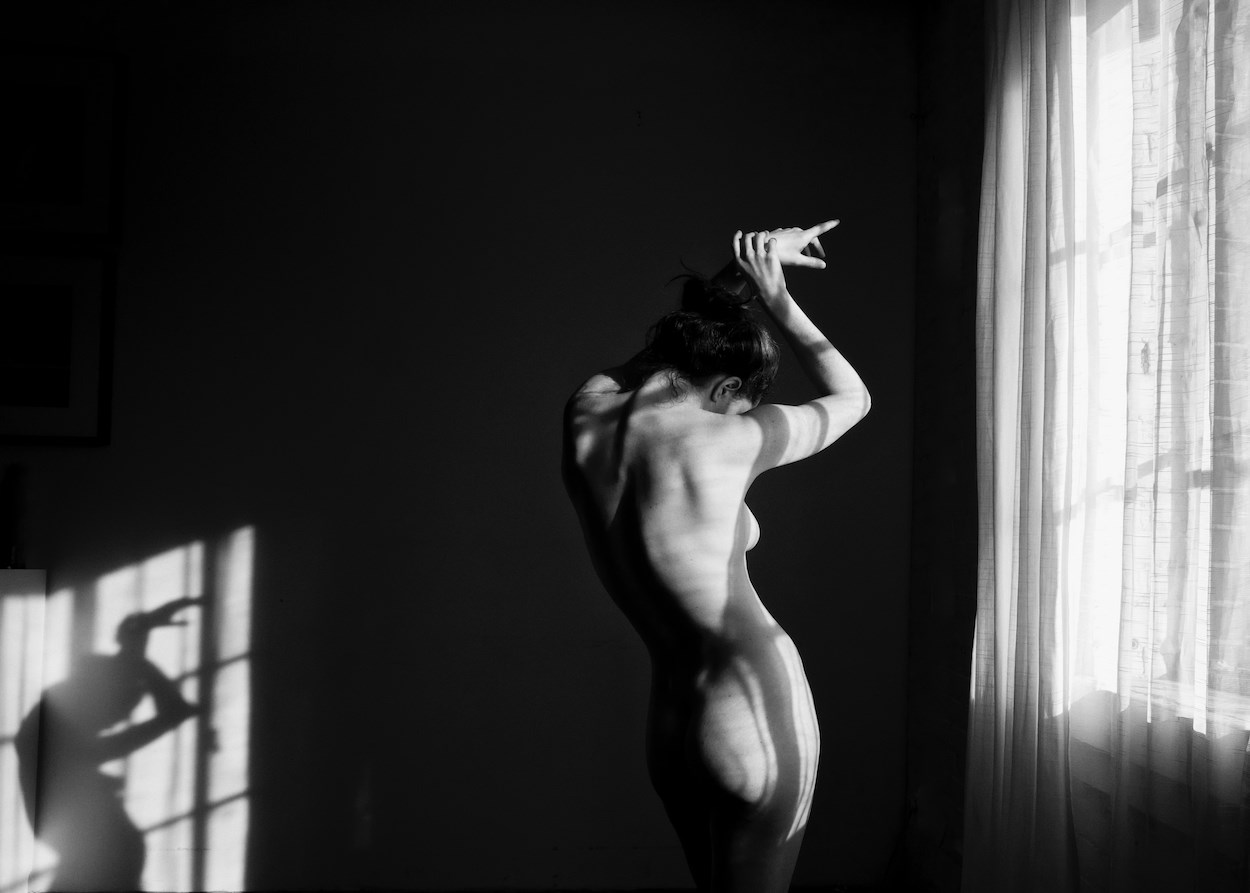 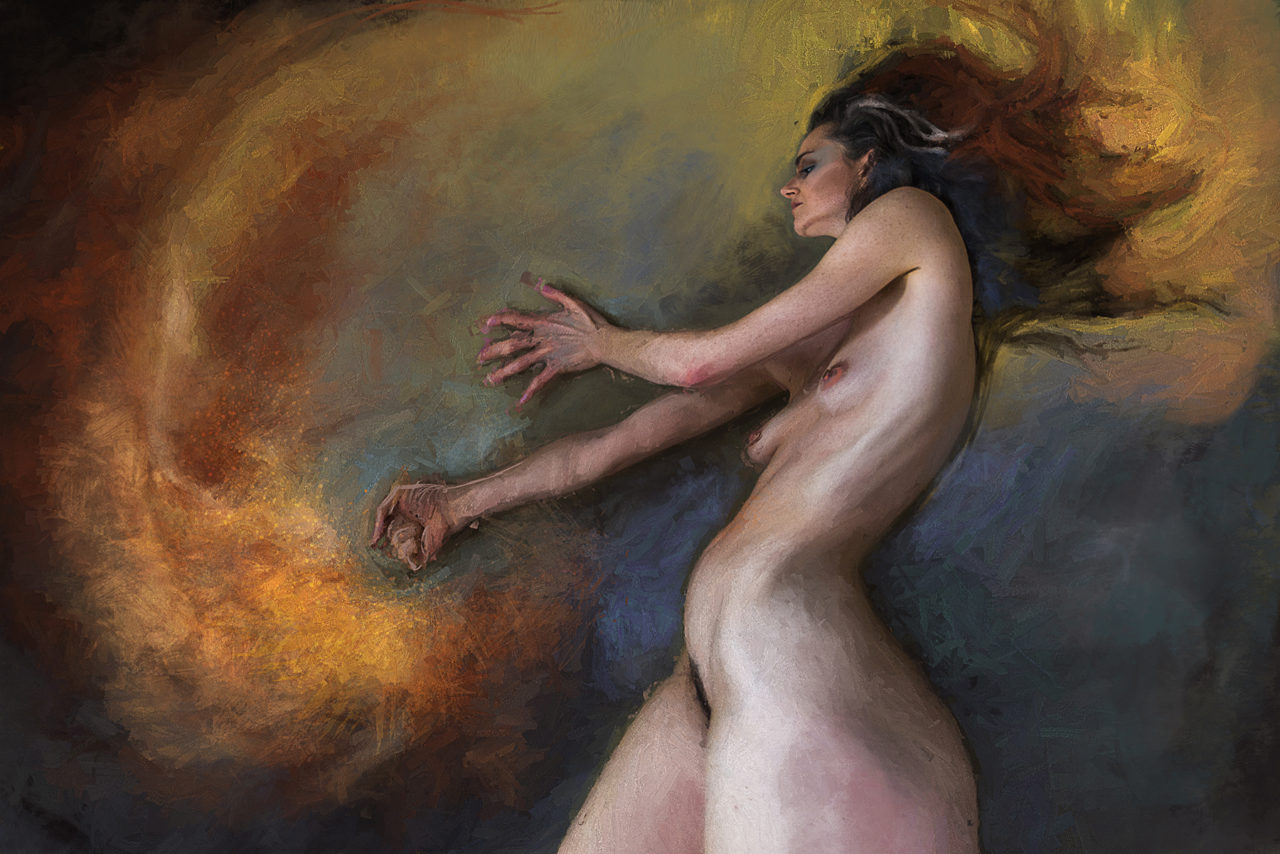 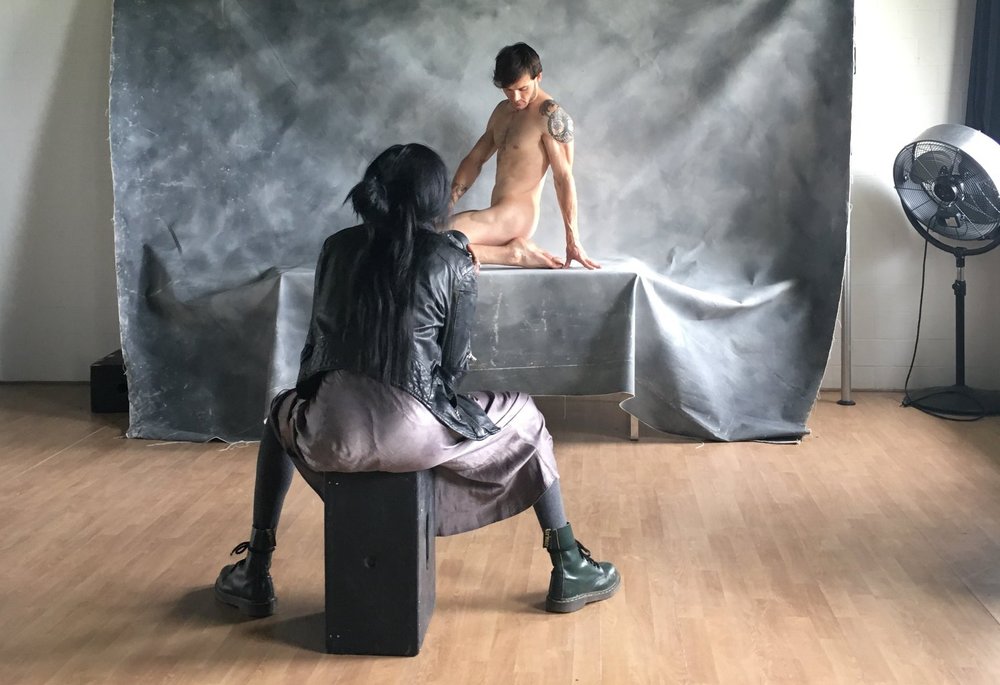 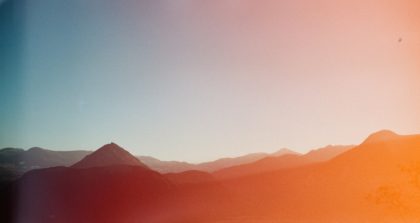 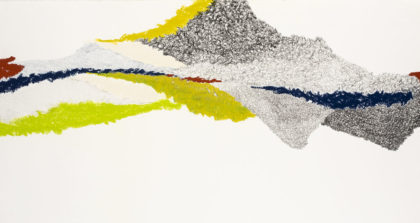 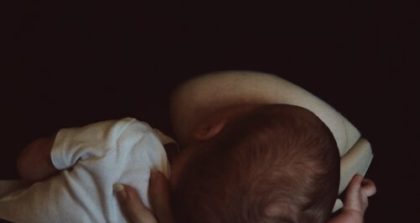 In Spirit: Woman and God 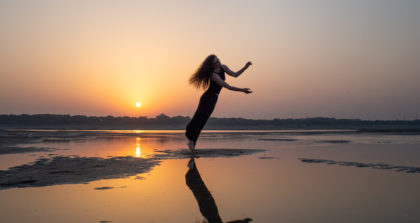 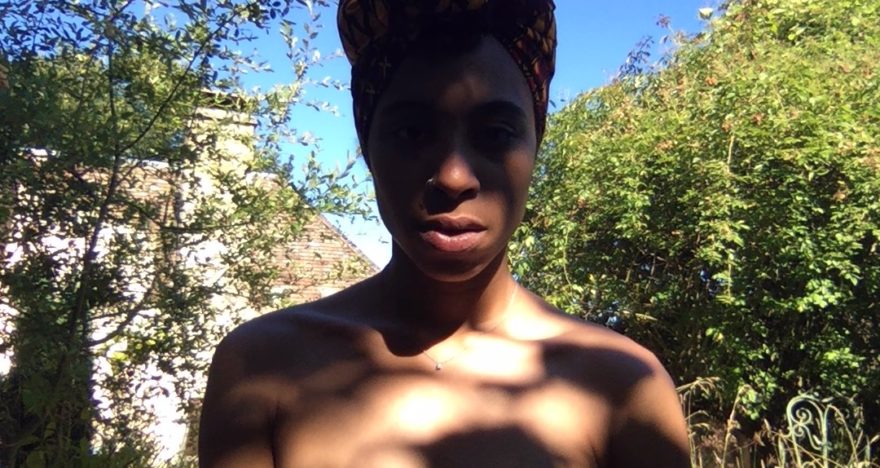 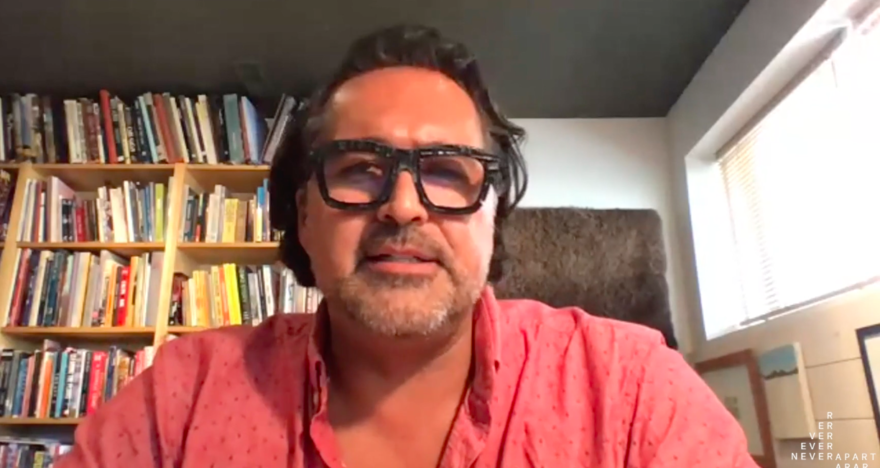