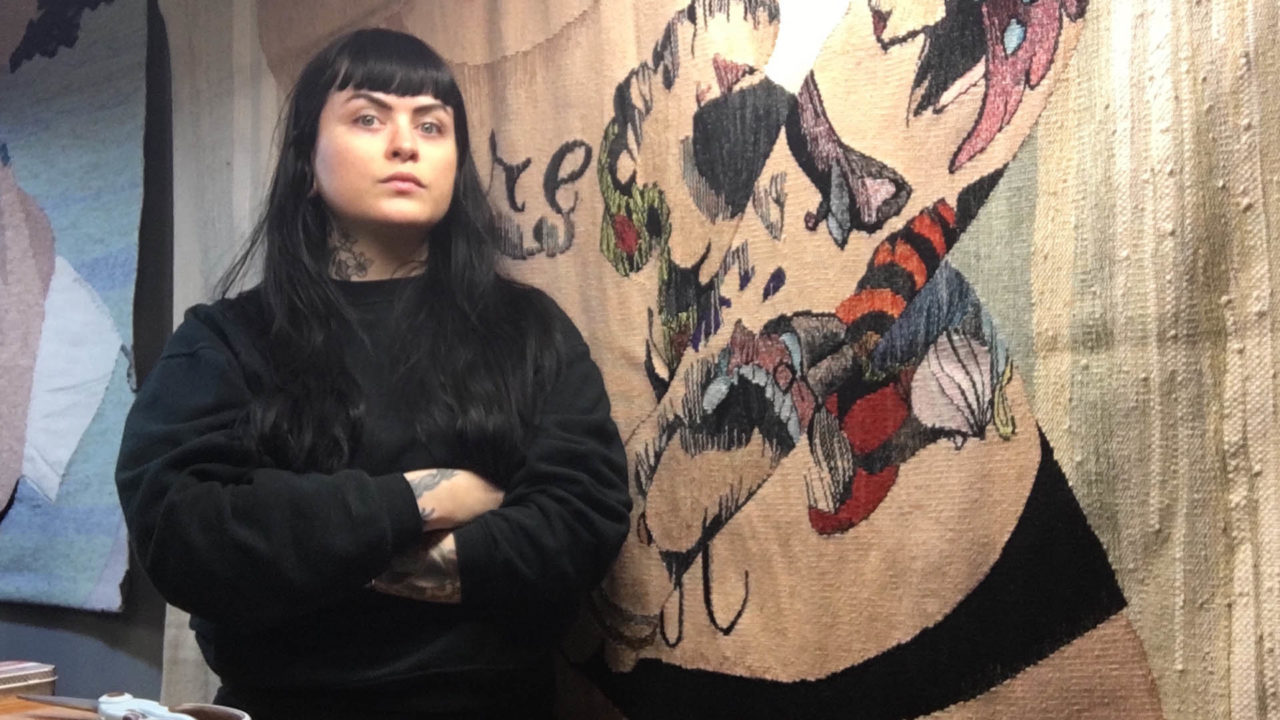 American-born artist Erin M. Riley’s handwoven tapestries are as much works of self-poetry as they are a critique of how we, the public, engage with subjects such as domestic violence, sexual objectification, and stalking. Riley weaves a portrait of an artist who, through her work, deals with the trauma of her own past experiences in the fastidious crafting of her striking pieces. We spoke to her about her process ahead of her upcoming show, “Head On”.

Before we get into your work itself, which is incredible, can you please just give the reader a bit of insight as to your process ? I think it’s important that people are aware that you dye and weave all of your tapestries yourself, by hand, the old-fashioned way— without the aid of a computer.

Yes, all of my work is made on a floor loom using hand dyed rug wool on a cotton warp. It is slow and antiquated but those attributes draw me into the process. It requires planning and foresight but once you’re at the loom you can improvise along the way within certain perimeters. I start by planning, drawing and scaling up the “cartoon” which is a paper sketch that is used as a guide during the weaving process, then I get the loom set up, dye all the yarn, get it on bobbins, and start weaving. Some pieces take a week, some take a month, it just depends on details and scale.

I think one of the fascinating things about a lot of your work is in the anachronistic presentation of “digital media”, i.e. video stills, selfies, text messages, etc. illustrated on, well… wool ! How do you feel this changes the way viewers interact with the subject matter, if at all ?

One of the many ways I have dealt with the fast paced life of the internet is by slowing down in other ways. Depending on who you’re interacting with there is this “bull in a china shop” activity with people who only interact or express themselves online. They forget their actions or words spewed online have IRL consequences for people around the world. I always wanted to give reverence to the litter of the internet in a way that a RT or a “regram” will never do and to pull things out of context that seem like normal or secret behavior and show them in a new light. So I think by weaving digital content into a tapestry the viewer is forced to see a simplified version of something that they might just scroll by or not even notice. 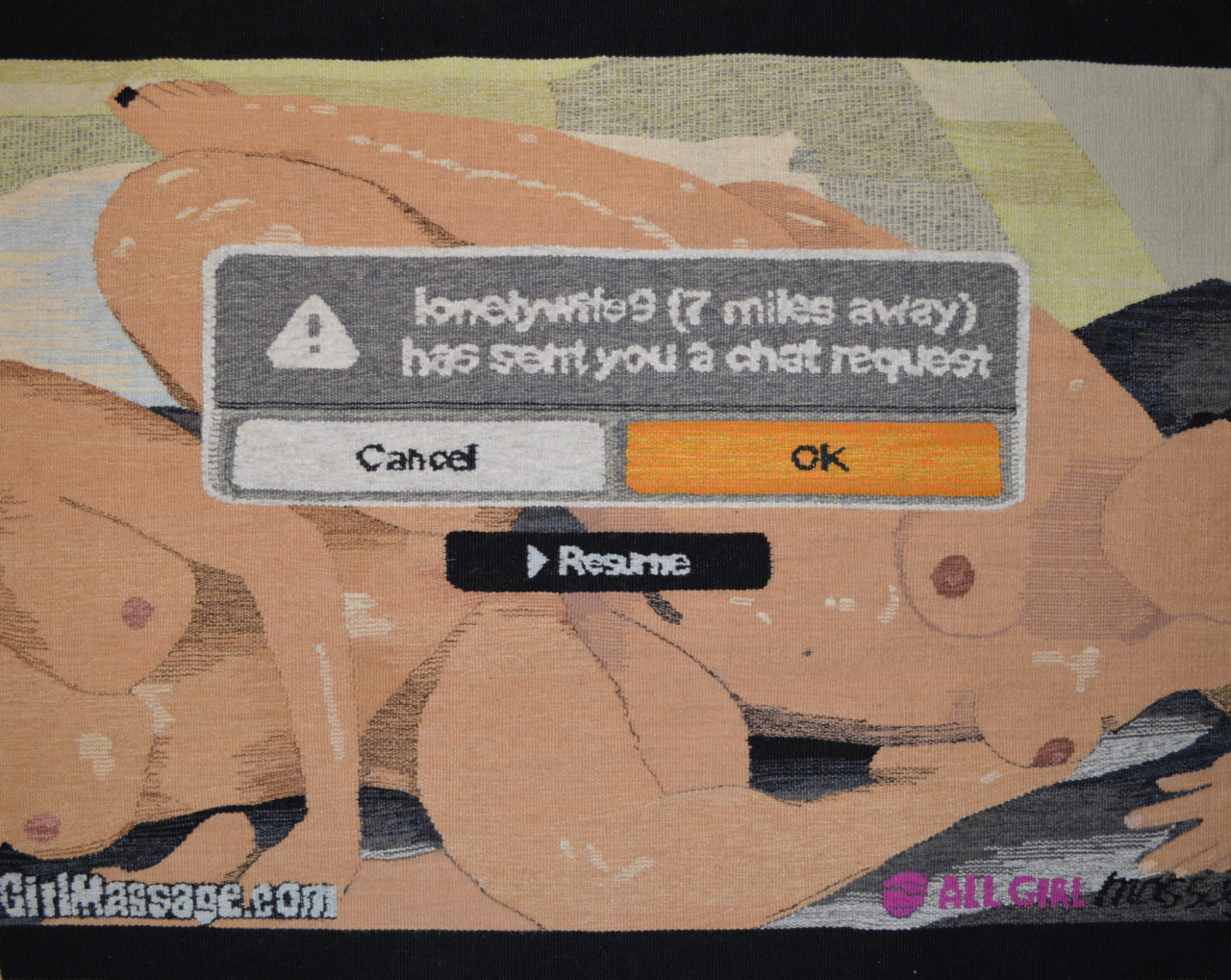 Do you think about the juxtaposition of the imagery and the medium itself much ? How does that pervade other aspects of your life, i.e. your relationship with the “old school” in your digital environment ?

I don’t think too much about the juxtaposition, its something that happens pretty naturally because tapestry has such a traditional interpretation by so many viewers. Anything that I would choose to weave is in some way or another directly in contrast to the tradition of tapestry, but that is just because of who I am as a weaver and the fact that I was able to learn a medium that has been historically pretty closed off to alternative identities.

Do you think portraying images this way is more powerful or effective perhaps, than simply through photos or other conventional forms of media ? Does it help in “demystifying” the taboos surrounding these subjects ?

I think by forcing me to devote time to the work, I am asking the viewer to do the same, shocking or violent imagery can be seen as objects, process and content when its too uncomfortable to take in literally. I hope that by making taboo subjects into physical things I am removing some of the power these issues have over people thus making them easier to confront. For me, dealing with sexual trauma, dating violence even pornography the incentive to keep things secret was always greater than outing yourself to the world, but by opening up and exploring content I am hoping to allow people to unburden themselves with the guilt and shame of these events. Nudity, expressions of sexuality are blurred and the bodies become pixelated, it confronts you with the reality of one persons images and hopefully opens the viewer up to seeing similar things with less judgement.

Do you think the medium itself, in its traditional form of say, appealing to ideas of “comfort” and “warmth”, helps overcome otherwise extremely traumatic subject matter ?

I do think so. It is natural to want to touch fabric, we interact with fabric on a daily basis and have a inclination to want warmth and comfort. The pieces relating to death and violence are alluring in some ways, they are affronts to the typical way these things are dealt with and they have allowed me to grieve through making the works so I want them to be jarring but comforting.

What does the work achieve for you— is it cathartic ?

It is definitely cathartic. I have always been a weave first, explain later, kind of maker so for many of my pieces I am in an unconscious state of forced honesty. Its almost as if I pretend I have no control over the work, and once its made I am forced to address passed events in my life which inspired either directly or indirectly. Its really quite terrifying but I do enjoy being put in such an uncomfortable position because it allows me to grow and connect with people on new levels.

What else have you got in store for the future ?

I am working on an upcoming solo exhibition exploring relationships and the imagery, objects and memory relating to them. I am researching the abstinence only education model in the US and I am working on a series related to the absurdity of that. I have also been working with 911 calls and transcripts from sexual assault survivor testimonies. The 2016 election brought up a lot of intense dialogue around trauma and unknown shared negative experiences so I am trying to delve deeper into truth, memory and facts and how these things reverberate through families, communities and cultures. 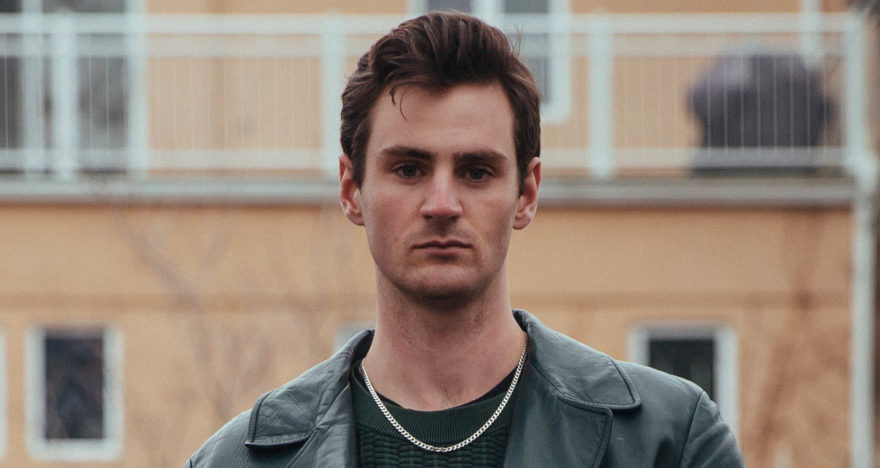 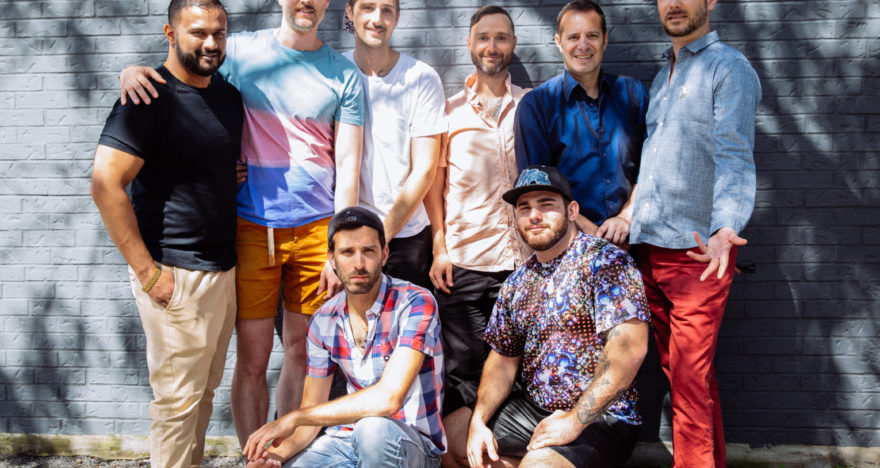