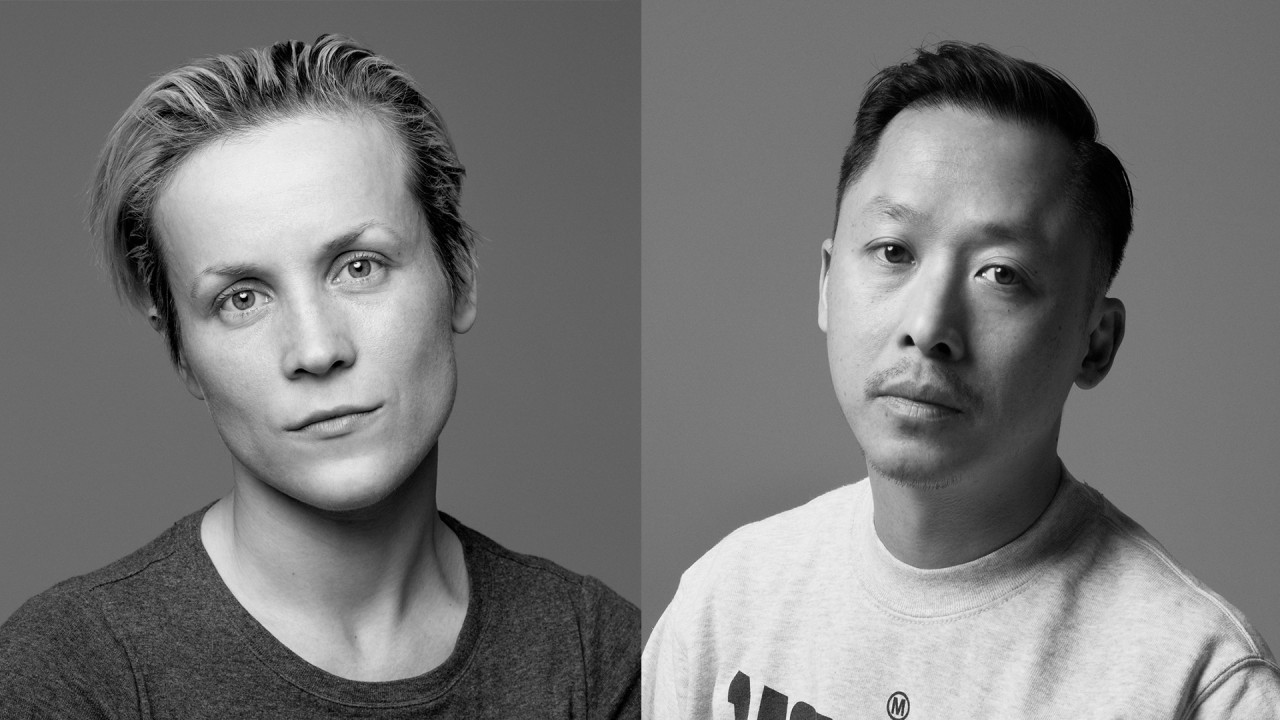 Recall the inside of your sister’s middle school locker in the 90’s. Bedroom walls, agendas, and closets used to be adorned with posters of famous pre-pubescent boys cut out from magazines like Tiger Beat–thoughtfully arranged by enchanted young girls (and probably some boys). Whatever happened to those iconic posters of baby-faced celebrity boys in overalls, bearing roses and looking at the camera with a look that said “I choose you as my date to the dance”?

Artists Richmond Lam and Eve Thomas have recreated these teen heartthrobs of yore in their latest exhibition at Never Apart called Poster Boys. While the subjects in the portraits evoke the uncanny resemblance to the 90’s posters that so many girls coveted, what’s remarkable is that all the subjects are women. Poster Boys is a comical and maybe even creepy collection of women posing as young boys, trying to appeal romantically to young girls.

The idea of collaborating on this project came about last year, when the two artists traveled together and bonded over their long exotic road trips. For Thomas, a magazine writer and editor, this photoshoot is somewhat of a departure from her other work, although she says humour and kitsch often finds its way into her art. Her only similar project would be would be a musical she produced based on the 90’s show, Degrassi Junior High. She’s currently working on a video game called #selfcare, which launches this spring. It’s Montreal photographer Lam’s first collaboration with another artist, and for him, the experience has been a refreshing challenge as both had to go beyond their own vision of what Poster Boys should be.

The concept of women posing as boys pose to capture the teen female gaze begs many questions. Why do/did young girls have it so bad–to the point of obsession–over stars like JTT, and was this poster-collecting craze unhealthy, or just a hobby that enabled female bonding? How are gay men supposed to react to the exhibit? What about this playful female-to-boy trans component? Teen girl magazine Tiger Beat was recently bought out, which also prompted Thomas to wonder if these kinds of corny boy star posters are still relevant to today’s 6th grade girl.

“Just discussing the project or showing images to friends has already revealed to me how it affects people differently, often based on their gender, age and sexual orientation. It’s actually tough to describe the project to people who’ve never read Tiger Beat or Bop, or watched TGIF shows. They’re like, ‘Oh, fun!’ but they don’t really get it. Then you have someone who crushed on Devon Sawa or wanted to marry JTT and they don’t need any explanation, they just get it–the aesthetic, the concept, all of the feelings and issues it stirs up,” explains Thomas.

While shooting, both Lam and Thomas discussed how strange it was to try and get into the minds of 90’s magazine editors, and how they decided these shirtless boy poses were what a little girl might want. Were these hairless boys what girls really desired, or were the teenybopper magazines shaping their desire? “It’s hard to come up with a conclusion, but I find that perhaps during the sexual exploration period of adolescence and the teen idol imageries were probably a mix of relatability and desire for the opposite sex,” says Lam.

Choosing the models for the project started with a somewhat vague open call over Facebook. “Our network of friends is quite diverse so it was relatively easy to find the right people to participate. I’m glad to see that our friends really placed their trust on us without knowing too much about the project,” says Lam. Pairing models with boys was a ton of work, an enormous puzzle. Thomas built a shot list and a spreadsheet, and spent hours fretting over which star and model would work best together, and then chose one or two iconic poses.

“I knew I couldn’t just have the models come in and improvise, since we had such a long shoot, plus I hadn’t worked with most of them before. I actually thought simply getting everyone to show up would be a lot of work as it is – there are 17 models – but every single model turned up, and a lot of them stayed the whole day to get made up and into character. People seemed to have fun watching everyone transform while kicking back and listening to the Backstreet Boys and Hanson play on a loop,” mentions Thomas.

Some of the photographs are exact replicas of poses and outfits from the teen magazines (and are probably easily recognizable by some ex die-hard fans), but you won’t find the name of the inspiration or the original photos in the exhibit. “It’s more about the vibe, the idea of the boy, than about the specific Hollywood star. There’s sort of this idea that these boys were interchangeable within their ‘types’–the jokers, the hunks, the poets–I mean, half of their names start with a J,” says Thomas. “The photos are inspired by boy stars but they aren’t exact copies. I just want to hit people, to make them amused and uncomfortable.”

“It was quite funny to try to emulate a certain photography style that is really not my own,” Lam says, while explaining how they got the models to recreate the teen idol poses. It was a challenge to get the adult female models to “unlearn” how they normally pose in photographs. Many of them remarked how weird it was to have their face shot straight on. “We had the inspiration images on set–not just to recreate them, but because the poses were so foreign to the models,” explains Thomas.

Ultimately, Poster Boys conjures a mixture of confusion, bemusement, nostalgia, and of course, it evokes important questions about the female gaze. Throughout the process, Thomas reveals she continually questioned how girls’ obsession with these boys seems to differ from how young boys desired women. She suggests, “Attraction is often a point in someone’s favour, instead of against them. I don’t think you can overstate the importance of empathy, either, across gender (or genders). If children raised as boys, and then adult men, are not considering girls’ or women’s interior worlds until they, say, fall in love or, god forbid, have a daughter, how can they ever catch up?” 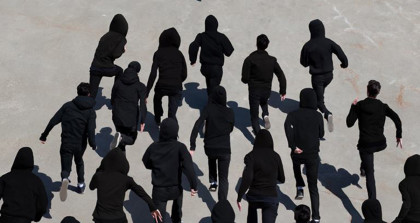 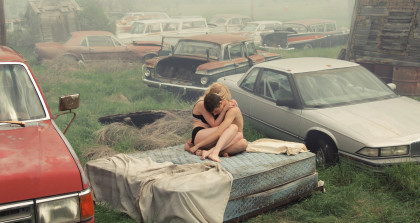 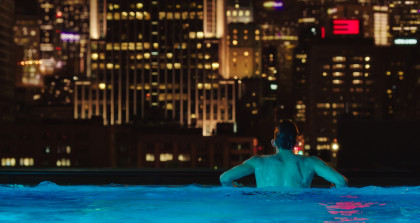 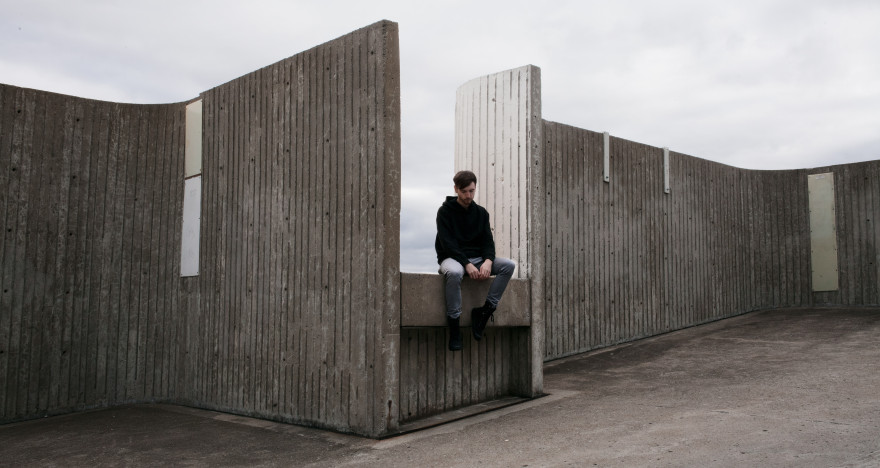