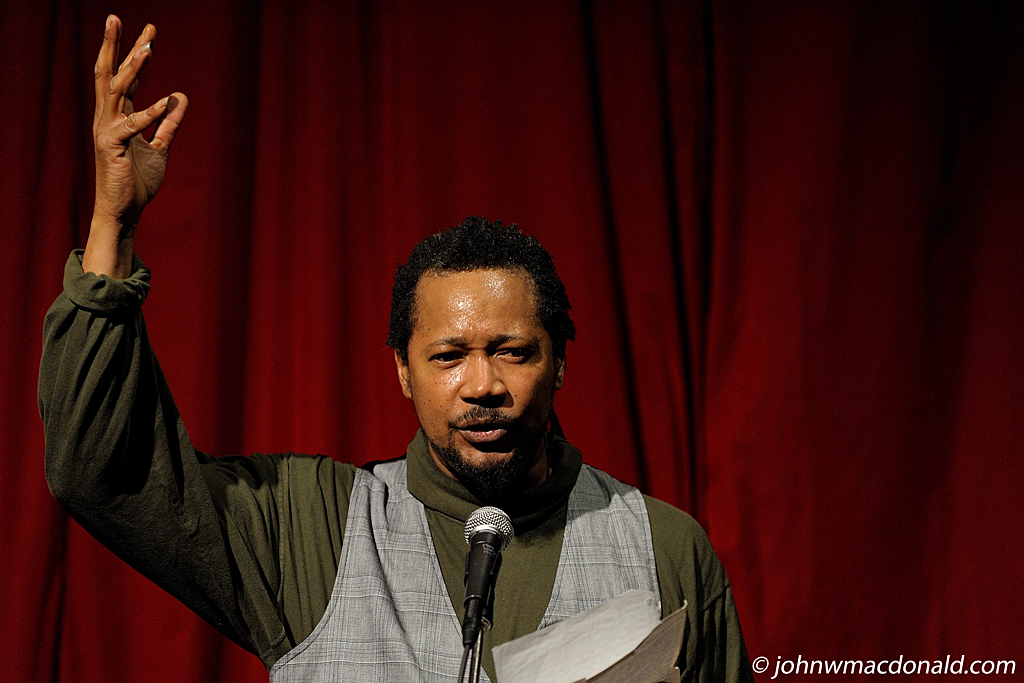 As a poet, Joseph is one of the founders of the dub poetry movement in Canada. He has performed widely across Canada, the United States, the United Kingdom and the Caribbean. Joseph is the recipient of two Gemini Awards for Best Writing in an Information Program or Series, a Freddie Award from the International Health and Medical Media Awards, a silver medal award from the New York TV Festival for his work on Undercurrents, and a Silver Fleece Award from the Chicago Film Festival for an Imprint documentary on dub poetry. He is also a two-time winner of the Best Dub Poet Award and recipient of The Peter Tosh Memorial Award from the Canadian Reggae Music Awards as well as Juno and CASBY nominations for his poetry.

Joseph has also written for The Toronto Star, The Globe & Mail and Contrast newspaper, as well as Toronto Life, Fuse, Freewheellin’ and This magazines.

In radio, he has been a producer and host for Ryerson campus station CKLN’s flagship current affairs program Saturday Morning Live, worked for CIUT, and written and reported for CBC Radio programs, including Morningside, Ideas, The Arts Tonight, The Entertainers and CBL News.

Who was the first person that noticed you were a great writer?

Don’t know about the “great writer” part, but looking back, I’d have to say that the first person to really encourage me into the writing/performing arts was an older man in my village of New Winthropes in Antigua, Mr. Murray, probably, visually, the most black, blackest person in “Blizzard” as we called our home on the northern coast of the island. I think I was around ten years old and in addition to singing the Antiguan calypso songs we heard on the radio, Mr. Murray would actually pay me a penny, or sometimes two-pence (we were still using the British colonial currency at the time) to make up my own “calypso” verses. The only snippet I remember from then are three lines: “in January they called me clinky, then in February they start to call me sebassie, and in June they start to call my cousin boone”…I have to give Mr. Murray maximum props for sparking that early interest in writing and performing.

The other person, in a slightly different way was Mrs. Jacobs, my first English teacher at the Princess Margaret Secondary School in the capital city of St. John’s. Even before that, growing up we would recite British poems in front of our classes and when I got to PMSS, I got fascinated by the English romantic poets whose poems we had to memorize. That got me more interested in the whole idea of memorization and reciting/performing poetry. So when I moved to Toronto in 1973, I continued reciting poems in high school at various cultural events and then slowly started writing my own early poems. I wasn’t a big fan of Mrs. Jacobs at the time, but now realize that she was partly responsible for my love of poetry and performance.

No, I was not introduced to Black writing at an early age, not at all. I grew up in a British colonial education system in which ALL works we read were British. I was introduced to and became interested in Black writing when I got to high school in Toronto, first to West Indian poets whose poetry I recited at cultural and other events then, and later with African-American writers and then when I got to York University, later, to African and other Black world writers. I left Antigua at 15 years old and to that point had NEVER read a book by a Black writer; and in high school in Toronto there was nothing Black on the curriculum. The “blackest” books I read in high school classes were ‘To Kill A Mockingbird’ and John Howard Griffith’s ‘Black Like Me’. It was through community and cultural groups that I got introduced to Black writing and started reciting west Indian poets’ works.

Did your upbringing have an effect on how you write poems?

I was brought up in Antigua in the world of “it takes a village to raise a child” where there was always a sense of the collective, the idea of a bigger family… and with plenty sounds and noise. I try to bring that sense of collectivity and of sounds aching to be heard and a loud approach to words and performance.

How important is it to shout out about not enough diversity in books?

It’s not so much shouting out and striking out about a lack of diversity in books, but more to the point to bring those books to the centre, to the forefront of things. We know that books have been written by black folks way before white people started putting pen to paper, as it were. So its always been about bringing those works forward. That’s why the push a few decades ago, along with the movement against “appropriation of voice”, sometimes derided as being “politically correct” was so important then and continues to be so. With all the literature produced by the peoples of the world, why should the canon of literature and the syllabus of university courses and curriculum be all-white? What gave “white” people that right or that arrogance? The more research that’s been done, the more we have found out that there’s ALWAYS been great literature produced by ALL of the world’s peoples. We have a duty to make sure that it stays diverse in how its taught, published, reviewed and propagated.

With your poetry and lyrics, you use jazz, satire, and topics relating to the black experience to craft words. Is this a more personal way to express yourself?

I started out writing poetry that you could call neo-romanticist, based largely on the influence of the British romantic poets, about nature, romance, elemental imagery and the concerns articulated by that school. It was in performance that friends would ask me stuff like, “ whats all this shit about streams and moonlight you are writing, man? When’s the last time you saw a stream?”; and then they would tell me that I’m too stiff, stilted and straight in my performance style. It was then that I started to incorporate my experience in student and community black politics and black culture and musical forms and aesthetics into my own writing and performance, and became more comfortable when I noticed how much more effective and satisfying it was. Much credit has to go to my friends and the audiences at the time. All of this was more personal and particularly cultural and from my personal and ancestral experience. This, of course, led to the exploration and development of the dub poetry and its aesthetics. I then brought more funk, soul, calypso, reggae jazz and other Black folk/cultural idioms into the aesthetic of my own works.

With relation to your political views, what do you think is necessary to bring about change?

What needs to happen to bring about change is that people, everybody have to become more aware of the politics of the world we live in, both historically and especially in relation to whats actually happening today. That’s why art, poetry included, is so important. Artists can raise issues that the mainstream, the status quo, etc are unwilling to highlight. Alternative understandings and approaches need to be put out there in the public sphere, meaning that at certain times it will be up to the artists to get their works out into the public sphere in whichever way they can. Then everybody, all of us, have a responsibility to become a part of the change that we desire. We ALL have agency to spark, spearhead, and sustain change. Positive change does not allow for spectators. We are all actors.

Do you think the race problems in Canada are similar to those in the United States?

Race problems in Canada and the U.S.A. are quite similar, especially because of the geographical proximity. Canadians like to think of themselves as somewhat cleaner when it comes to race relations but history and reality does not support that. White supremacy is white supremacy whether it’s in the U.S.A, Canada, the West Indies, South Africa, or wherever. Its based on the idea that white is supreme among all peoples and therefore different, inferior treatment is meted out to other races, through laws, etc. such as during slavery, or through restrictions and more subtle but equally pernicious practices like racial profiling, carding and continuing discriminations like red-lining in housing and bank loans, inferior services in black, brown, First Nations communities and individuals. Yes, indeed! Canadians should remember that before setting up their system of apartheid, the white boer, racist South Africans studied the Canadian reserve system and white Canadian treatments of this country’s First Nations. And, by the way, yes: there was slavery in Canada.

You have a way of expressing your mental thoughts aloud with vivid monologues and I’m wondering if you ever thought about doing theatre? For example, a skit such as ‘Swimming to Cambodia’ by Spaulding Gray. I think you’d be awesome and electrifying.

Yes I have thought of theatre, monologuing, a one-man show, some kind of fringe-theatre production… but I haven’t gotten there yet. Time will tell if I ever even get there. I just have not yet put the right time and effort in that area. I have spent a lot of time working as a full-time journalist writing for print, radio, television and the internet; as well as a publicist and as a host and emcee. I absolutely enjoy all of that work. I also realize that its damn hard to do it all, but hope to something theatrical sometime.

There is a vibrant poetry scene in Antigua, unlike when I was growing up there; and I’m familiar with a number of very fine writers and performers. However, I’m not influenced by them. There is a representative group of Antiguan poets and writers here in Toronto and Canada, including Motion, Jelani Nias, Tanya Evanson, Althea Prince, Carl James, who probably have had some kind of influence.

You are known as a Dub Poet and I’m wondering if that’s still the case in terms of your recent repertoire of work?

Yes, I’m still a dub poet. No matter the changes or expansion of the style, my approach is as a dub poet. I started out reciting solo, then started including musical and fold and sound stylings; then with a congo drummer; then to performing and recording with musicians; then doing video. In all of those the central aesthetic of dub remains: how to make words have sound and accompanying power to affect/effect and inspire. So, yes: I’m a dub poet forever. 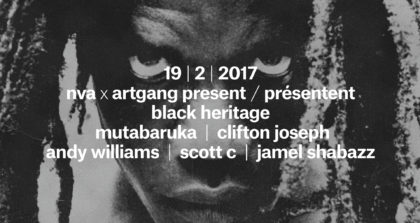 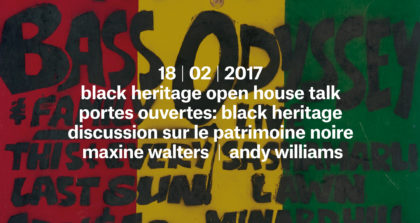 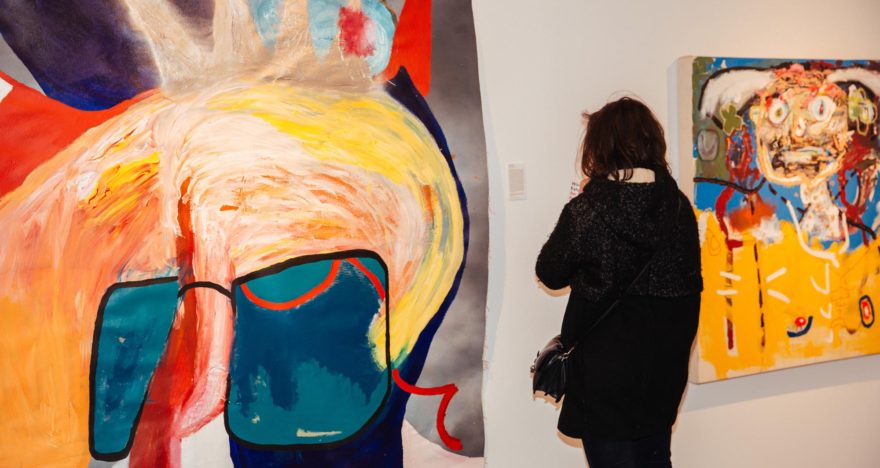