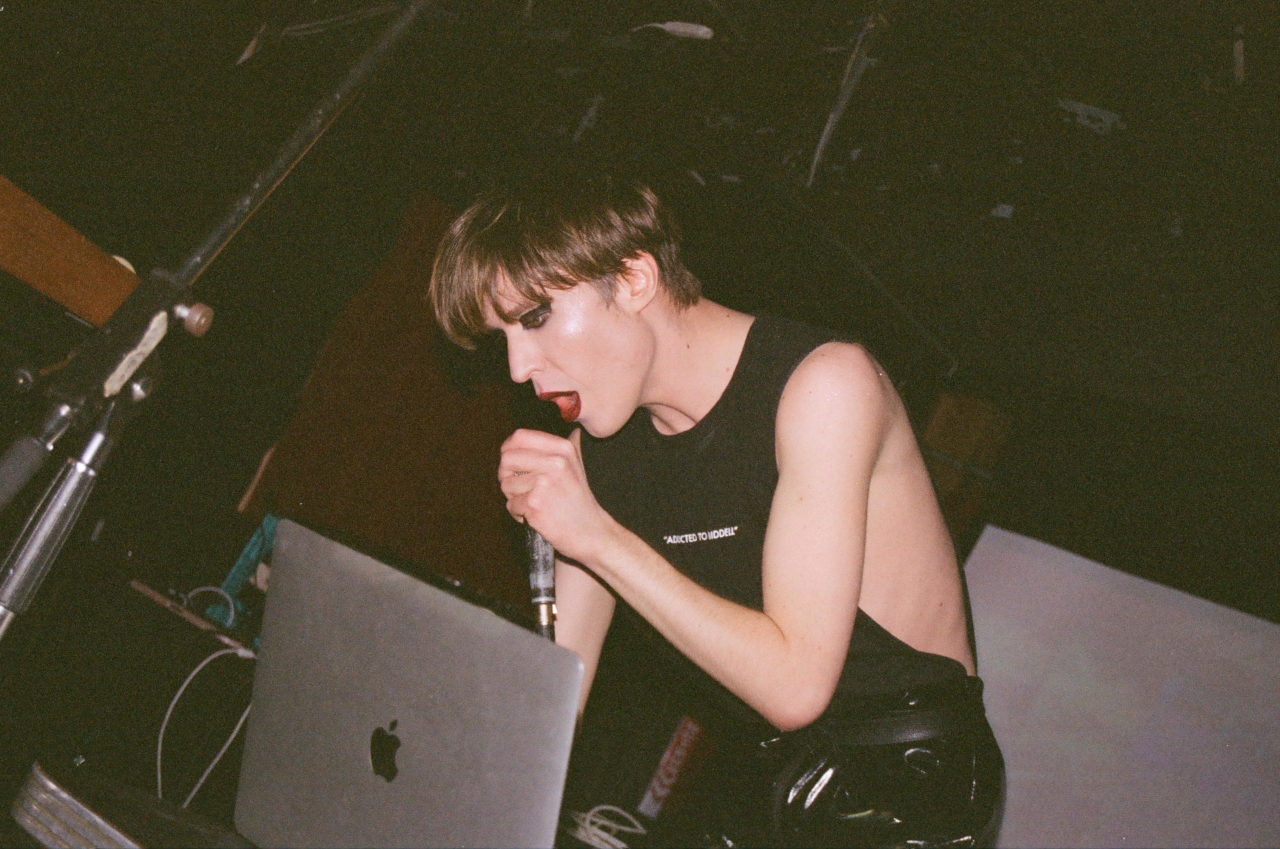 If Britney Spears and Marilyn Manson had a baby, they would be Awwful, one of Montreal’s most brilliant, multi-talented artists.

Awwful is a musician, producer, performance artist, event producer, and DJ. Known within the underground queer nightlife scene for the Unikorn dance parties they co-organize, Awwful is poised for a mainstream breakthrough with their fantastic new album Affection. Picking up where 2017’s glittery, electro, bubbilicious Human left off, Affection is a daring, emotionally evocative pop odyssey. Listening to the album feels like entering a sonic landscape, populated with dark synths and uplifting beeps and blips that make you feel like you’re flying. It’s magical, as is its creator. Awwful is an artist you need to know. I was lucky to catch up with them recently to talk all things music, and I hope this conversation convinces you to hop onto to Spotify and listen to them immediately!

I am obsessed with your new album, Affection. I think it’s a sweet coincidence that my album also has the word affection in the title. Why did you call the album Affection? What does affection (the word/idea) represent for you?

Thank you! You know, I think it’s interesting, your record is titled Safe From Your Affection, and the idea that affection is something to protect yourself from is central to my album. I’ve been hurt by acts of affection, mostly because I repeatedly mistake them for acts of passion or love, and this record is very much about that. Affection is its own thing, and it’s dangerous because it feels a lot like love but is often a spasmodic expression of something else.

I feel like with this album you’ve created such a unique musical universe that is so distinctly you. Correct me if I’m wrong, but you wrote all the songs, you do all the vocals, you made all the musical tracks, you produced and mixed, and engineered the album all by yourself. That is ASTOUNDING. That it is an overwhelming amount of work, and I’m wondering if you could talk about your recording process? Do you record everything at home? Do you work in a studio?

Yeah, I write, record, produce and mix everything in my apartment, and then self-release it. I can’t say I even have a home studio, I do most of my work on my bed with equipment scattered around me. The amount of times I’ve had to edit my cat out of a vocal take is ridiculous. I’m self-taught in every area so my approach is probably unconventional, I just tweak and experiment until it sounds right. Lots of trial and error and trusting my ear. The only track on the album I didn’t write is “Blue Light”, which is a Mazzy Star cover.

What are the challenges of doing all those things yourself?

The fact that I handle every step myself means I usually have to listen to my own tracks many, many times before they’re completed, so it’s easy for me to get sick of my own stuff before I release it or lose any sense of objectivity I might have. I’m also a bit of a perfectionist, and being self-taught can lead to bouts of self-doubt when I get stuck on something, which isn’t cute or productive.

How long does it take you to complete a song?

It really depends. Some songs jump out of me spontaneously and others have grown from melodies or ideas kicking around in my head or hard drive for years. Sometimes I’m stumped on how a track should be mixed and spend months on it, other times the demo version ends up being the final.

Considering how personal the album is, considering it’s you that’s done all the work, were you nervous about releasing it into the world? How do you process people’s reactions to your work?

For sure, there’s always some degree of nerves when releasing music that’s so personal, but I feel like vulnerability is essential to making any sort of real connection between people, and I try to remind myself of that whenever I have an impulse to hide or hold back. As long as I’m confident in its honesty, I never get too nervous about my work’s reception. I just accept it as my truth and hope that it connects.

Who are your musical inspirations?

This is a big question. I grew up listening to pop divas, eurodance, industrial goth and new wave so my inspirations are all over the place. I love Britney as much as I love Nine Inch Nails. I think Mariah is as genius as Bowie. I listen to Kraftwerk and Carly Rae Jepsen on the daily. Aqua’s debut album slaps. My name is inspired by a Hole song. I’m really into contemporary artists like Arca and SOPHIE who are pushing the boundaries of electronic music. I’m inspired by a lot.

One of my favourite things you’ve ever done is your electro ballad cover version of Cher’s “Believe.” What were you channeling in that song? What did you hear in the original that you wanted to bring to the forefront in your cover?

Thank you! One time I was feeling like shit and listening to some Cher ballads from the 70s and having a good cry, as you do, and “Believe” came on shuffle and in that moment revealed its complete and utter sadness to me. Suddenly her powerful, repetitive bridge of “I DON’T NEED YOU ANYMORE” sounded more as if she were desperately trying to convince herself she’d moved on rather than state a fact. When you realize the refrain of the song is “I can feel something inside me say, ‘I really don’t think you’re strong enough, no’”, the club banger suddenly feels less about empowerment and more about emotional defeat. I wanted to reveal that by giving it a softer arrangement. Unfortunately, I got picky about the mixing and took down the cover from my socials, but I’m working on a new mix, I promise.

Why do you love Cher so much?

Where to begin? Living legend, her voice is singular, expressive, powerful and heartbreaking. She’s a fashion icon, an Oscar winning actress, THE auto-tune pioneer, and a fierce ally and activist with the best Twitter account on the internet. Her career spans nearly 7 decades, and at the age of 74 she’s pumping out god-tier ABBA covers for the gays and touring the world, all while remaining humble and unapologetically herself. What more could you ask for?

Do you remember the first song you wrote? When did you know music was what you wanted to pursue?

Music has always been my most favourite thing, as far back as I can remember I’ve wanted to make music and perform, although growing up I never took lessons or had access to instruments. I started playing around with GarageBand in college and posting really rough demos to Tumblr instead of doing my physics homework, and it eventually became my main focus. I dropped out of school and worked a lot of shitty jobs to save up for equipment, and spent a lot of time experimenting with software and teaching myself how to play keys. I’m not sure what my first song was but I can assure you it was bad.

In addition to making music and DJing, you also co-host and co-produce the Unikorn Parties, which were a staple of Montreal queer nightlife in the before. Can you talk about how Unikorn came to be and what the intention behind it was?

In 2015, my friend Jeffrey and I taught ourselves how to DJ and started a little night at NDQ called Glitter Bomb. It was originally promoted as a queer synthwave night. We quickly gained a following and I started throwing in some Britney here and there and before we knew it we had this colossal queer pop party on our hands. When we moved to Bar Le Ritz PDB for more space, the stage there allowed us to hire drag artists to perform, and I quickly became entrenched in the culture and community, and became very close friends with a small group of likeminded queers who had a dream of a more drag-centric party experience. Together we cooked up Unikorn at La Sala Rossa. Unikorn was and is meant for every queer kid who has ever wanted a safe space to dress up, gender-bend, let loose and be surrounded by a community of other freaks and queerdos, while also providing a monthly stage for alternative and marginalized drag/performance artists that might not get as much exposure elsewhere in the city. It is a party for the community, by the community, and is probably my proudest achievement, together with Glitter Bomb. I’ve witnessed many artists bloom at both of those parties, plus they’ve given me the privilege to meet and work with so many talented queer folks.

I think all nightlife creatures and performers have had a unique experience dealing with social isolation. Our lives and livelihood are so attached to the physicality of being together and sharing spaces and we’ve lost that. How have you been handling this time of separation? Is there any aspect of social distancing you’ve actually enjoyed?

It has admittedly been rough. I didn’t realize how much of my self-worth I place in the nightlife work I do, so having that aspect of my life virtually dissolve overnight was a hard reality to face. At the same time, I actually really needed a pause for my mental health because there was other stuff going on in my personal life that I wasn’t taking time to address. It would’ve been nice to do it on my terms instead of being thrusted into it but honestly, under any other circumstance I’m not sure I would’ve allowed myself a true break. One thing I’ve enjoyed about social distancing is actually having the time to listen to the hundreds of records and tapes I have piling up in my apartment, and watch films I’d been meaning to get around to. Isolation hasn’t been the greatest creative muse, so I can’t say I’ve been working on a quarantine masterpiece, but I’ve had the opportunity to sponge up a lot of art and stockpile some new inspiration, which has been nice.

What is your vision of nightlife for the future?

I’m not sure what the future looks like, I don’t think that anyone does right now, but I certainly hope that the feeling of unison and euphoria in a sweaty, glitter-crusted crowd of queers can once again be captured in some sort of capacity that feels as free as before. I cannot overstate how vital that energy has been for me, my friends, and the community of folks who come out month after month to the parties. Online Zoom parties have been cute placeholders but already feel a little dystopian. I really don’t see the future of nightlife existing primarily online.

What are you working on next?

That’s the big question. Definitely more music, I’m always writing and producing and experimenting, but I haven’t committed to any one project yet. It’s all just a primordial soup of .wav files on my hard drive and scribbles in my notebook. I released Affection in April but the pandemic prevented me from doing anything more than an online release. I’d like to eventually shoot a video for one of the tracks and hopefully get back on stage to perform. As for parties, that’s all on pause, but obviously out of my control. I feel pretty free creatively right now, so I’m just going with the flow. I’m excited for whatever comes to me next.

You can find Awwful all over the internet. Their music is available at awwful.bandcamp.com and all major streaming platforms. You can also find them on Instagram @awwful. 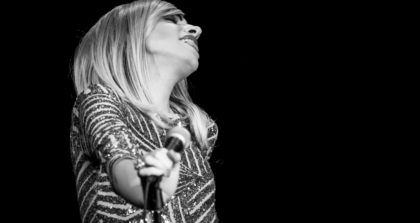 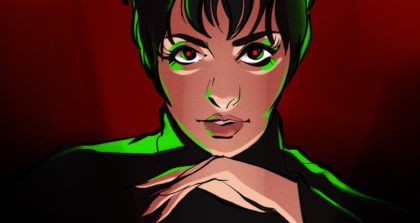 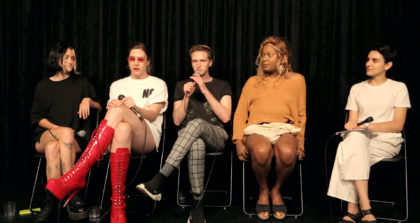 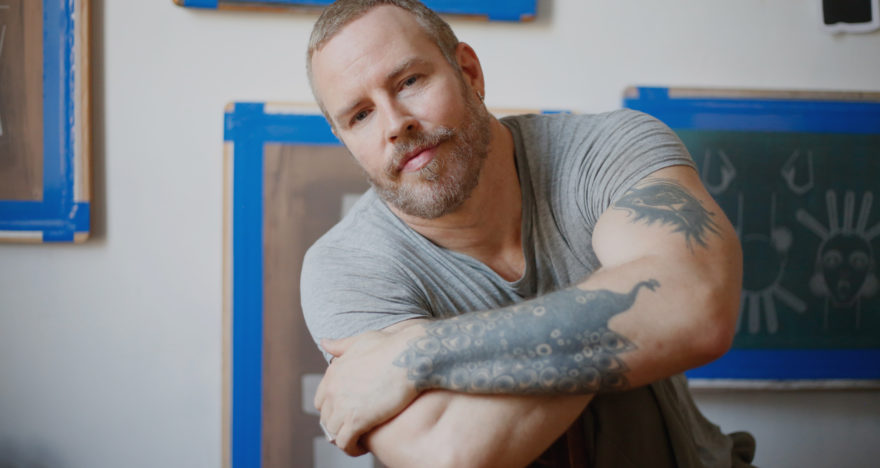